The February 1948 coup d’état in Czechoslovakia and the unification congress of the Polish Workers Party and the Polish Socialist Party held from 15 to 21 December 1948 in Poland led to long decades of undisputed dominance of communist parties. Paradoxically a large number of Zaolzie inhabitants supported these radical and undemocratic changes. In both countries the leading role of the party quickly turned into dictatorship which on many occasions did not hesitate to use repressive measures. In practice Polish Cieszyn and the adjoining Český Těšín were the epitome of the friendship between nations declared by Stalin. Political treaties, cultural agreements and the small border traffic resolutions marked the official history of the towns in the years 1947-1989.

It was only on March 10, 1947 that the Treaty of Friendship and Mutual Assistance between the Republic of Poland and the Republic of Czechoslovakia was signed in Warsaw. The protocol worked out by the Polish party granting “possibilities of national, political, cultural and economic development” became an integral part of the treaty. At the same time the treaty stipulated that “there will be no consent for renewed activity of any Polish organization active before October 1, 1938. New organizations will be formed – Polish Cultural and Educational Association (Polski Związek Kulturalno-Oświatowy – PZKO) and Polish Youth Association (Stowarzyszenie Młodzieży Polskiej – SMP), one of each in the districts of Frysztad and Cieszyn.”  In 1952 the district boards were inactivated and the Central Board of the Polish Cultural and Educational Association (Zarząd Główny Polskiego Związku Kulturalno-Oświatowego) was formed in their place. Earlier, in 1950, the SMP had been incorporated into Czechoslovakian Youth Association. Thus PZKO became the only official representative of Poles in Zaolzie and remained so until 1989.

In compliance with earlier assumptions, the next agreement was signed after twenty years on March 1, 1968. This time the defensive character of the Treaty of Friendship and Mutual Assistance was emphasized indicating the threat of “the forces of West German militarism.” The Munich Agreement with all its consequences was considered invalid, thus repudiating Polish claims from 1938.

Cultural agreements supplemented political treaties. Pursuant to the first, signed on July 4, 1947, Cultural Institutes opened in Prague and in Warsaw. All postulates were to serve the strengthening of “the ideological unity in the spirit of Marxism-Leninism.” The next agreement was signed in 1966 and then prolonged a few times until 1990.

However, the small border traffic resolutions played the most significant role in the lives of Cieszyn inhabitants on both banks of the Olza River. After 1945 the resolution was based on the one from 1925. In force in an approximately 15kilometre zone on each side of the border, it provided for permanent, temporary and economic passes. The new resolution signed in 1959, a year after the Polish-Czechoslovakian boundary settlement, became effective in April of 1960. It abolished economic passes and permanent passes issued on grounds of family ties. This substantially limited unconstrained contacts between inhabitants to special occasions such as weddings or funerals. The emergence of “Solidarność” (“Solidarity”) in Poland frightened the Czechoslovakian authorities to the point of unilaterally suspending the resolution on December 4, 1981. To cross the border one needed an invitation from the closest family. Only on November 1st long queues formed at the border point. On All Saints’ Day it was possible to visit cemeteries after obtaining a certificate from the Civil Registry Office. The Poles took advantage of this opportunity to perfection. This situation, despite Cieszyn authorities’ protests, lasted until 1991 and seriously weakened family and social ties with those on the Czech bank.

The prestige of both towns diminished after administrative reforms – the Czech in 1960 and the Polish in 1975 – deprived them of their district capital status. Still, Český Těšín retained its major significance for the Polish national movement. It was the site of the Central Board of the Polish Cultural and Educational Association and the editorial offices of such Polish papers as “Głos Ludu” (Voice of the People), “Zwrot” (Turn) and “Nasza Gazetka” (Our Newssheet). There was also an active Polish Stage at the Těšínského divadla (Tešín Theatre), a Polish kindergarten, primary school and junior high school.

Despite mutual distrust, the inadequate infrastructure of both towns forced them to cooperate. As Cieszyn had no railway connection, Cieszyn district head Paweł Targosz signed – in 1945 – an agreement by which Czechs were to deliver coal to the Cieszyn power plant. In return, Poles supplied them with electric power and drinking water. A few years later it was the Polish side that needed potable water supplies. In the 1960s steps were taken toward collaborative urban planning. Border bridges were built and pulled down, thus complicating the already difficult traffic situation. Finally, after years of discussions, a new border crossing point between Kocobędz and Boguszowice was built. It opened in 1991 and solved the problem of motor traffic.

In reality for many years life in each town followed its own course and only occasionally did the inhabitants participate in joint party manifestations or sporting events.

The first took place on March 10, 1947 and was linked to the Treaty of Friendship and Mutual Assistance signed on that day in Warsaw. The second was held a year later, on March 14, 1948, on the anniversary of the said Treaty, in the market squares of both towns and – if one is to believe the press – it drew 40 thousand participants.

In 1958 the popular Blue Ribbon of Olza (“O Błękitną Wstęgę Olzy”) motorcycle races were inaugurated. The best Polish and Czechoslovakian participants competed in front of a few thousand motorsports fans who came to Cieszyn and Český Tešín. The 3200 meter course led from the Freedom Bridge (Most Wolności) to the Polish part of town, then through the Friendship Bridge (Most Przyjaźni) to Główna Street and the railway station and back to the Freedom Bridge. For many years, thanks to the technical superiority of Czech Jawa motorcycles, our neighbours triumphed. It was only in 1966 when besides the motorcycle races car races were introduced and Sobiesław Zasada, who with his Steyr-Puch 650 TR lapped most competitors, gained the status of a national hero. 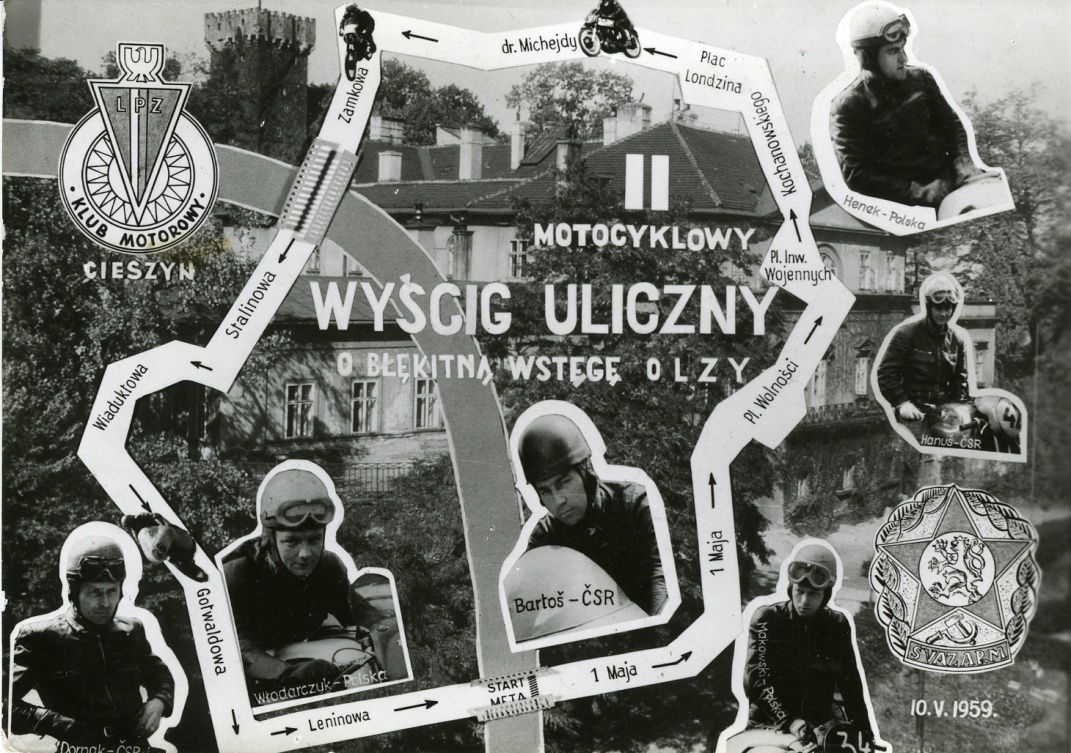 That year (1966) in May, as a part of 1000 years of Polish statehood festivities, the entire North-Moravian district celebrated 10 centuries of Polish-Czech neighbourly relations. 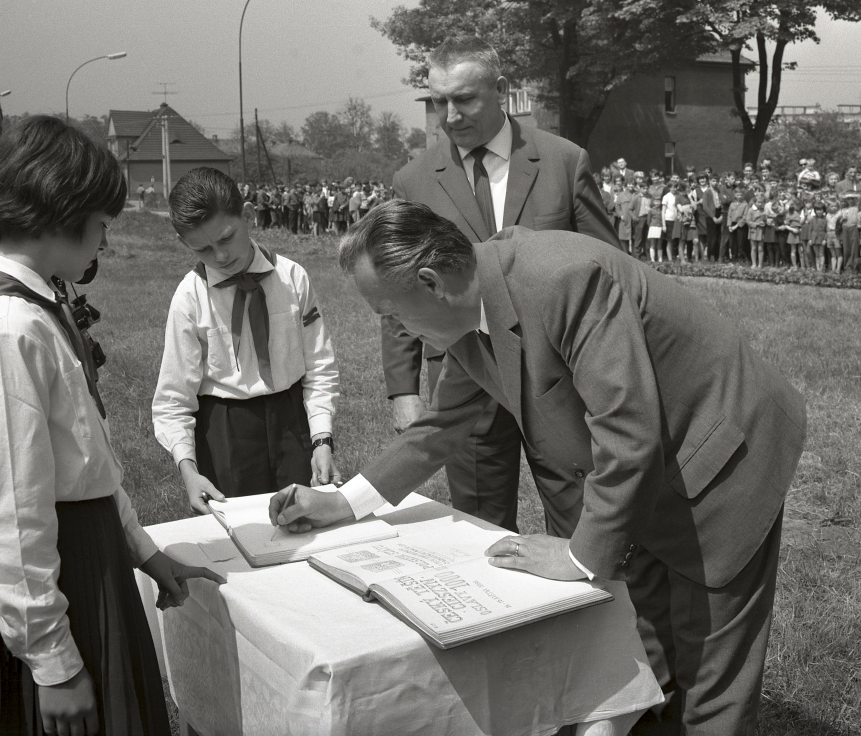 A lot of attention was paid to the setting and publicity given to party meetings which were to confirm the brotherhood of the Polish United Workers’ Party and the Communist Party of Czechoslovakia. The planting of lime trees in front of the Český Tešín theatre became an unintended symbol. It was done by the First Secretary of the Party in Katowice Edward Gierek and the First Secretary in Ostrava Oldřich Volenik. In Polish Cieszyn, larch trees were planted in the ZOR Housing Project near the primary school. On that day, the participants of the manifestation in Cieszyn Market Square crossed the Freedom Bridge (Most Wolności) without passes and in the evening bonfires were lit along the border.

The border was also open on May 9, 1968, the 23rd anniversary of liberation of Czechoslovakia by the Soviet Army and the 50th anniversary of the formation of the Czechoslovak state. With slogans declaring “inseparable ties with the Soviet Union” the rally in Český Tešín Town Square drew up to 30 thousand people. All the more startling was the night of August 20th of the same year when Polish army together with Soviet forces crossed the border and invaded Czechoslovakia. 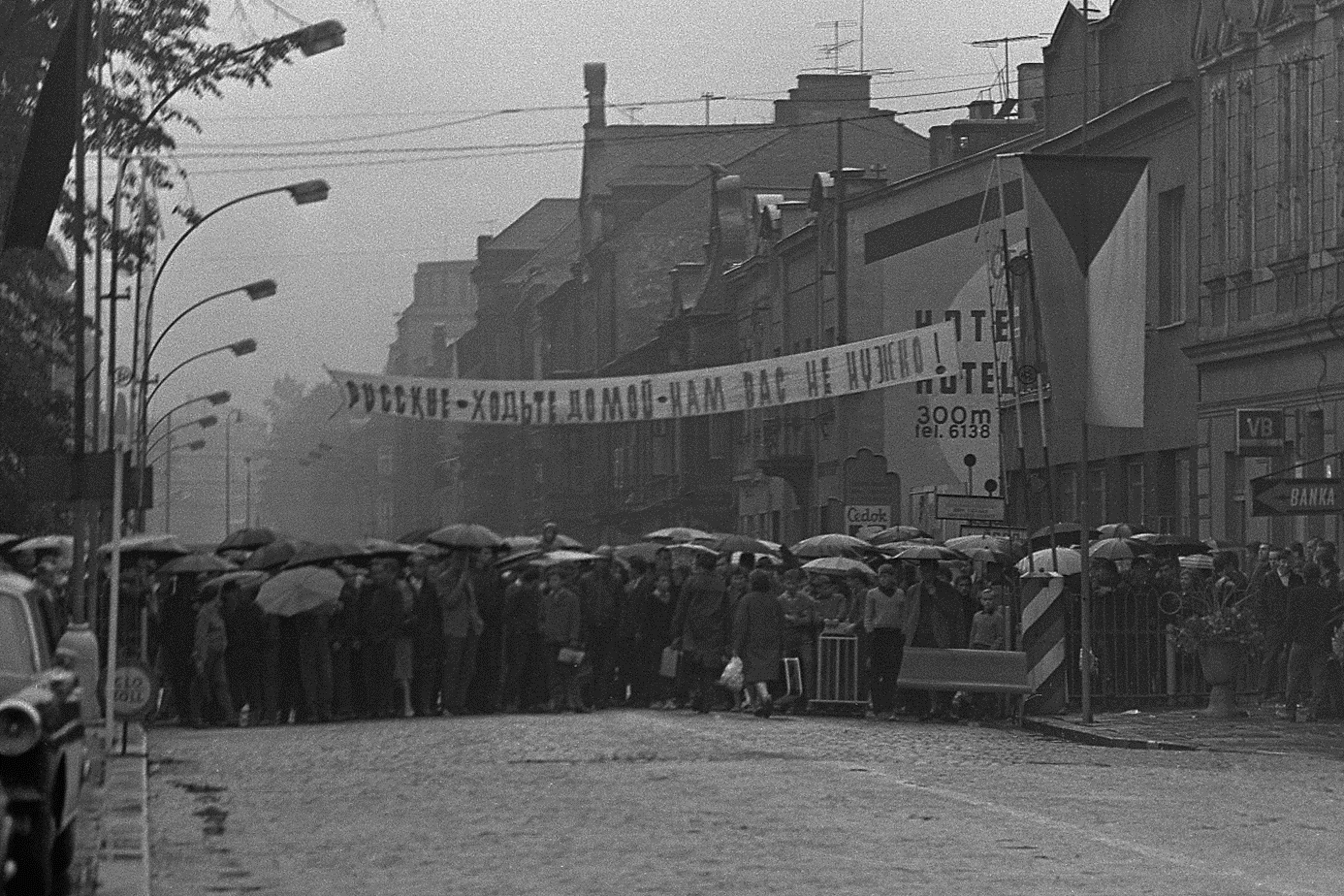 A manifestation organized on August 21, 1989 in Cieszyn Market Square on the 19th anniversary of the invasion was an attempt at reconciliation. For formal reasons the official organizer was the 5th Branch of Cieszyn Silesia Motherland (Koło nr 5 Macierzy Ziemi Cieszyńskiej) within which – unofficially – members of the Polish-Czechoslovakian Solidarity were active. The rally was led by Marian Dembinok and the key message was delivered by Jerzy Kronhold*. Jacek Kuroń and Józefa Hennelowa spoke for the members of the Polish Parliament. It was the first time that the words of apology for Polish participation in the August 1968 invasion were uttered. A large number of participants and the presence of parliament members – Grażyna Staniszewska, Krzysztof Kozłowski, Karol Modzelewski, Janusz Okrzesik and Jan Rokita – added weight to the import of the message. Of significance was also the public reading of telegrams from Václav Havel and Cardinal František Tomášek. 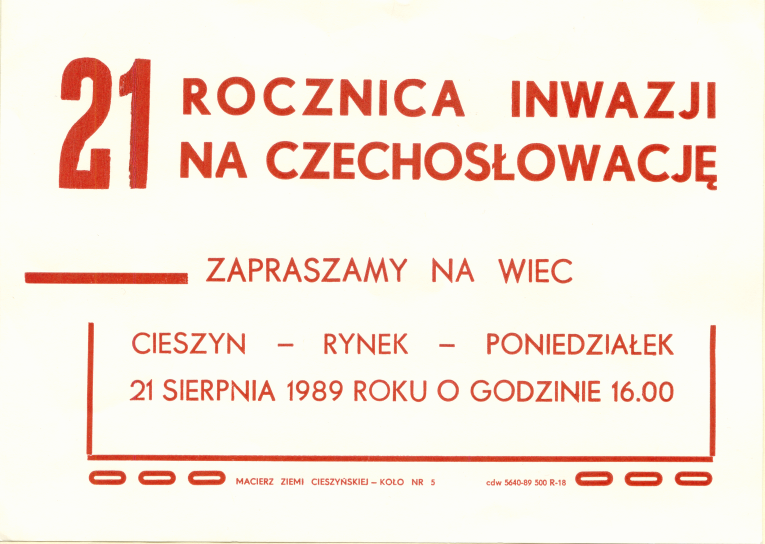 The protests against the building of a coking plant in Stonawa, in immediate proximity to the state border, were also significant for the Polish-Czech relations. Here the activists of Polish-Czechoslovakian Solidarity under the cover of the legally functioning Macierz Ziemi Cieszyńskiej organized protest rallies on May 19 and October 5, 1989 and on April 27, 1990. Their actions, on the Czech side supported by Občanské Fórum (Jaromír Piskoř), led to the suspension of the construction on November 15, 1990.

It seems that the joint manifestations began genuine collaboration, later undertaken by local governments of both towns. 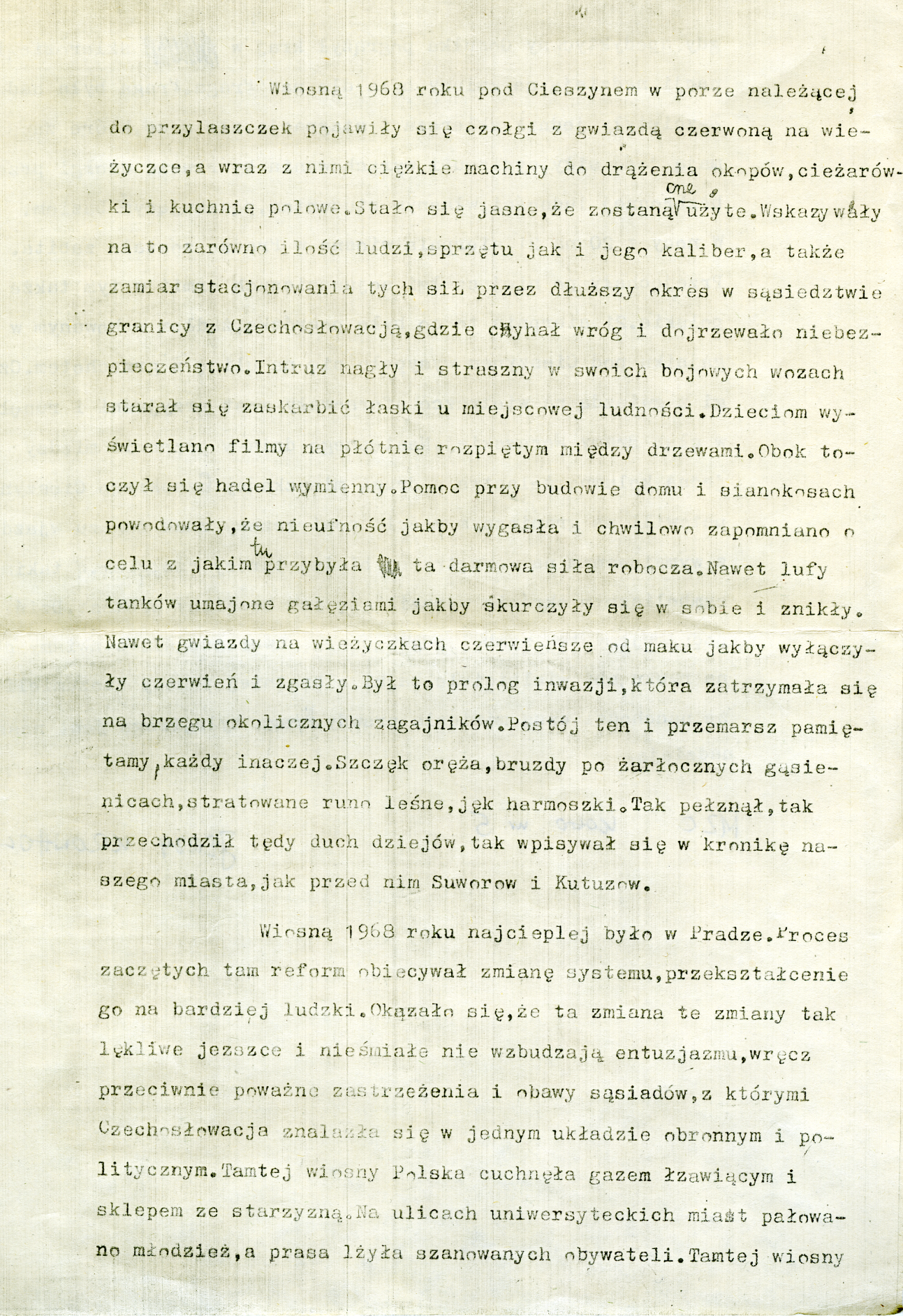 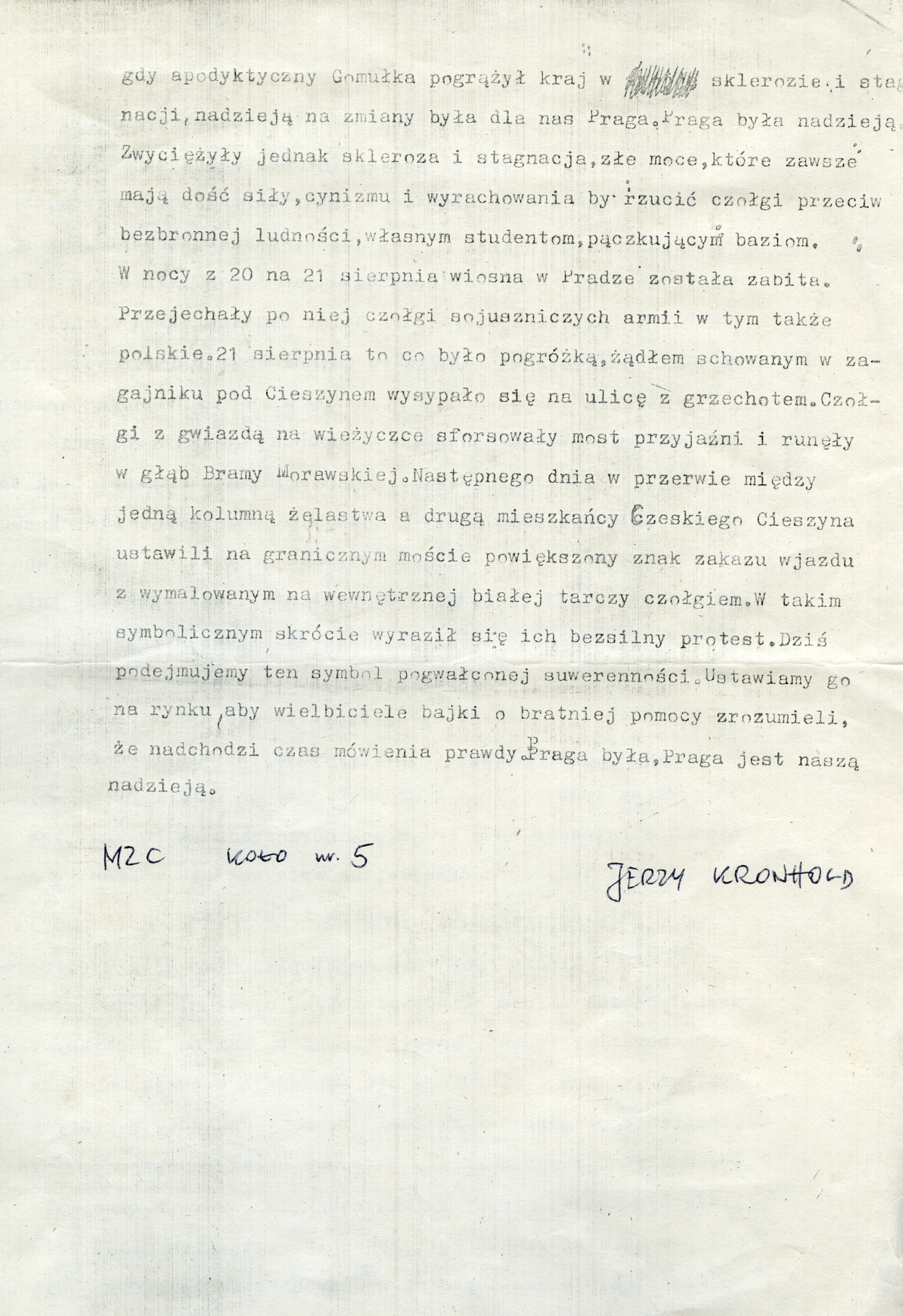 In the spring of 1968, a time reserved for anemones (liverworts), tanks with red stars on their turrets appeared near Cieszyn, followed by heavy machines for digging trenches, by trucks and mobile field kitchens. It became clear they would be used. The signs were easy to read: the number of people and arms and their calibre, and the intention of stationing these forces close to the Czechoslovak border, beyond which the enemy lay in wait and danger swelled. The intruder, sudden and frightful in his armoured vehicles, tried to ingratiate himself with local population. On sheets stretched between trees films were screened for children. Close by barter trade went on. Assistance with house building and harvesting caused the distrust to abate and people momentarily forgot the reason for the presence of the free help. Even tank barrels adorned with twigs seemed to shrivel and disappear. Even the stars on the turrets, brighter than poppies, as if turned off their redness and faded out. Such was the prologue to the invasion which stopped at the edge of nearby groves. We remember this stopover and the march through, each of us differently. Clash of arms, furrows left by voracious caterpillar tracks, trampled undergrowth, the moan of an accordion. Thus the spirit of time crept, passing through here and thus it entered the chronicle of our town as Suvorov and Kutuzov did before.

Prague was the warmest city in the spring of 1968. The process of changes initiated there promised a change of the system, its transformation into something more human. It turned out that this change, these changes, still timid and shy did not arouse enthusiasm but, on the contrary, reluctance and anxiety in its neighbours with whom Czechoslovakia was bound by a defence and political alliance. That spring Poland stank of teargas and junk shop. In the streets of university towns young people were bludgeoned and the press reviled respectable citizens. That spring when apodictic Gomułka immersed the country in sclerosis and stagnation, Prague was our hope for change. Prague was hope. But sclerosis and stagnation, and the evil forces which are always strong and cynical enough to throw tanks against defenceless people, its own students and budding cattails won. On the night of August 20 the spring in Prague was killed. It was run over by tanks of allied forces, including Polish. On August 21 what had been a threat, a venom concealed in a grove near Cieszyn, spilled rattling into the streets. Tanks with red stars on turrets forced their way across the Friendship Bridge and plunged into the Moravian Gate. On the next, day the inhabitants of Český Tešín, in a gap between one iron column and the next, put up an enlarged no entry sign on the border bridge with a tank painted against the disc’s white background. In symbolic shorthand it expressed their helpless protest. Today we take up this symbol of violated sovereignty. We place it in the town square so that the devotees of the fable about brotherly assistance will realize that the time of speaking the truth is at hand. Prague was, Prague is our hope.