The division of Cieszyn which resulted from the decision of the Conference of Ambassadors, announced on 28th July 1920, was the beginning of a new town called Český Těšín. The Czech part, apart from the unquestionable satisfaction with the diplomatic, and to some extent, military success, had to face the basic problems typical for existence and development of a new urban organism. 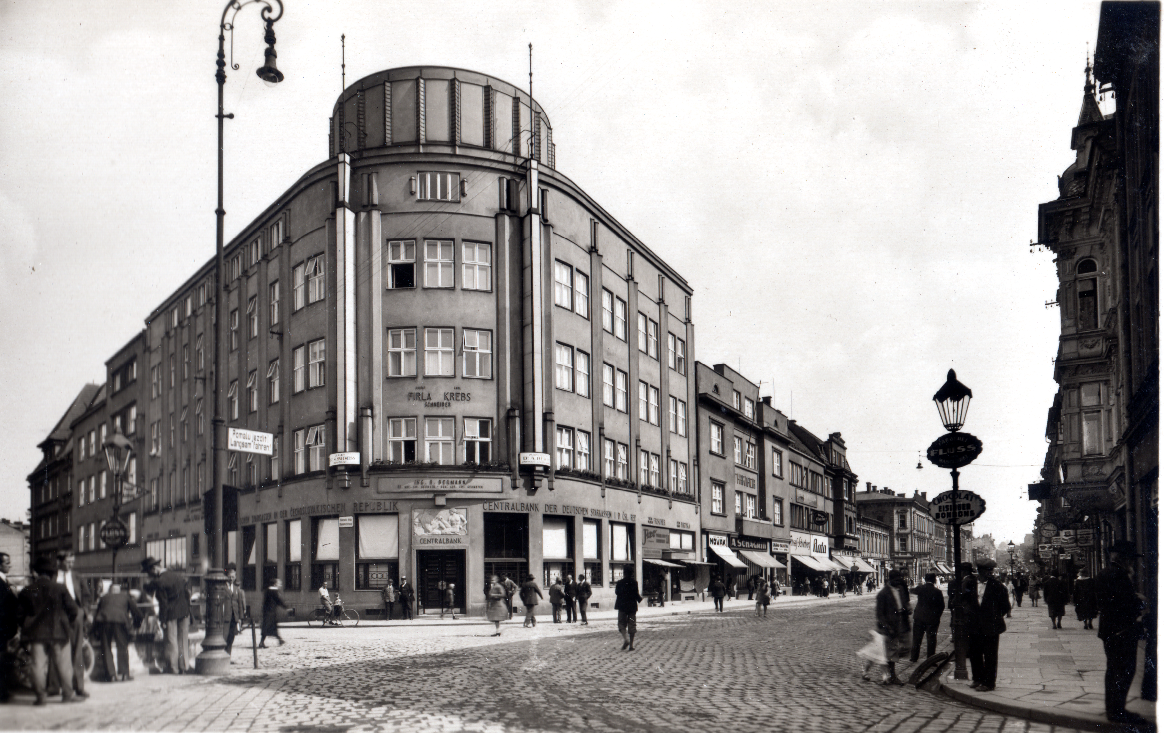 The building of the German Savings Bank built between 1929-1930 by a Cieszyn architect, Eugen Fulda.

The first municipal elections were held in 1923 and despite the disapproval of the Czech authorities, the votes cast by the Germans, Silesians and Poles (in the proportions of 15, 5 and 2 respectively, against 13 Czech votes) lead to Józef Kożdoń, the leader of Silesian separatists, becoming the mayor. During his term of office the town developed at an incredible pace, which involved the construction of a hospital, a kindergarten and a school, including a Polish school, and most importantly, a great number of residential houses as well as an estate of one-family houses located in Rozwój District. Three Protestant churches (in the districts of Rozwój, Na Niwach, and the Bohemian Brethren church in Frydecka street) as well as a synagogue and a municipal cemetery were built next to the catholic church. They were accompanied by the construction of administrative buildings, among others, the County Office and in 1928 Český Těšín received its own town hall, next to which in 1933 a new market square was created. The town was intersected by a network of streets in addition to the establishment of a municipal slaughterhouse as well as development of trade and restaurant infrastructure. Due to all the success, Kożdoń was re-elected as the mayor of Český Těšín both in 1927 and 1931. In 1938 he won the elections for the fourth time. However, a month later, when Zaolzie was taken over by the Polish Army, he was removed from the office. 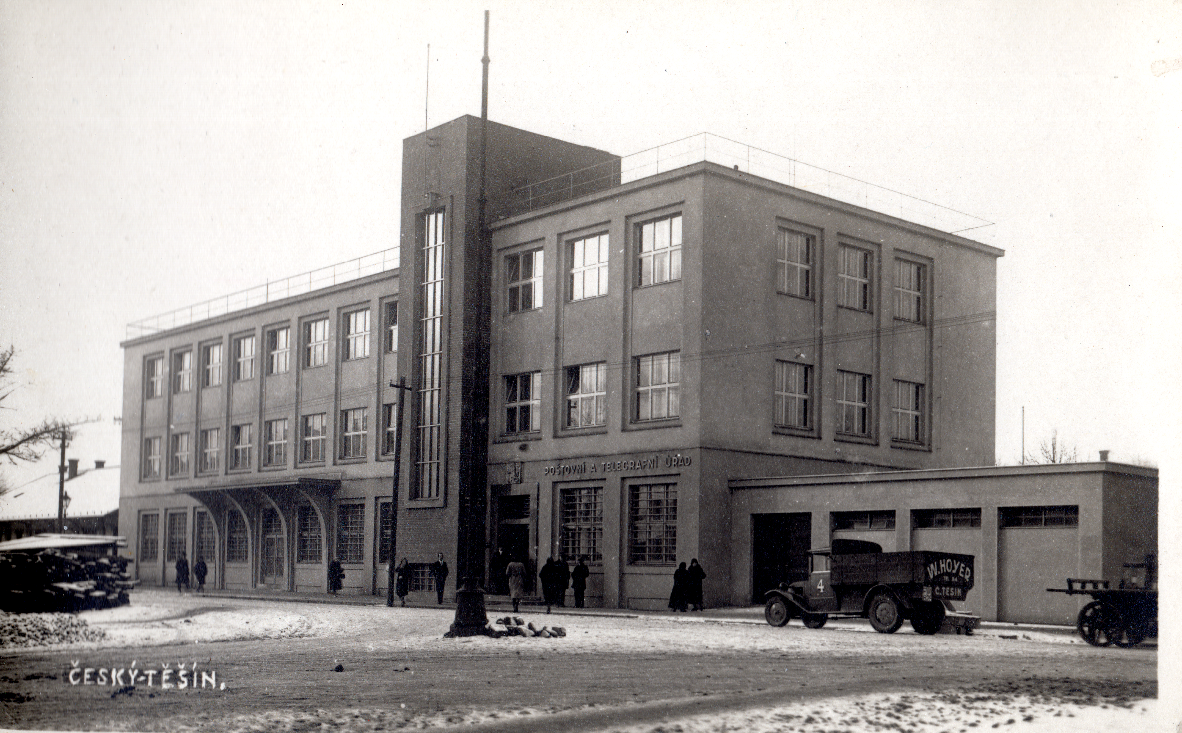 Post Office in Český Těšín built in 1931 according to the design of Josef Zadražil from Prague.
(Cieszyn Silesia Museum collection)

Despite the cold relations, the authorities of both towns were forced to cooperate, especially at the beginning. In 1932 Poland entered into a non-aggression pact with the Soviet Union, followed by a similar agreement signed with Germany two years later. That temporary removal of the threat led to the tightening of the policy towards Czechoslovakia, which resulted in radicalization of moods among Poles not only in Zaolzie, but also in Český Těšín and Cieszyn. As a consequence of this situation, in 1935 Polish sabotage groups, which would carry out minor sabotage and propaganda actions, were formed.

“Combat troops from the Cieszyn platoon, which comprised 23 people under the command of Fryderyk Ryś and Karol Don, acting in two groups, attacked in the direction of Jabłonków. Having crossed the border near Istebna, the troops fell into a trap near Hryczawa, where they fought a battle with the army, gendarmerie and the National Guard, which were armed with machine guns. As a result, Witold Reger was killed and Antoni Pieczka was taken captive. Others fled helter-skelter to Poland” – this is an extract from the report on the operations of the Polish Combat Troops in Zaolzie on 26th September 1938. The action claimed the life of a son of Tadeusz Reger, an outstanding socialist activist and the co-creator of the National Council of the Duchy of Cieszyn in 1918. 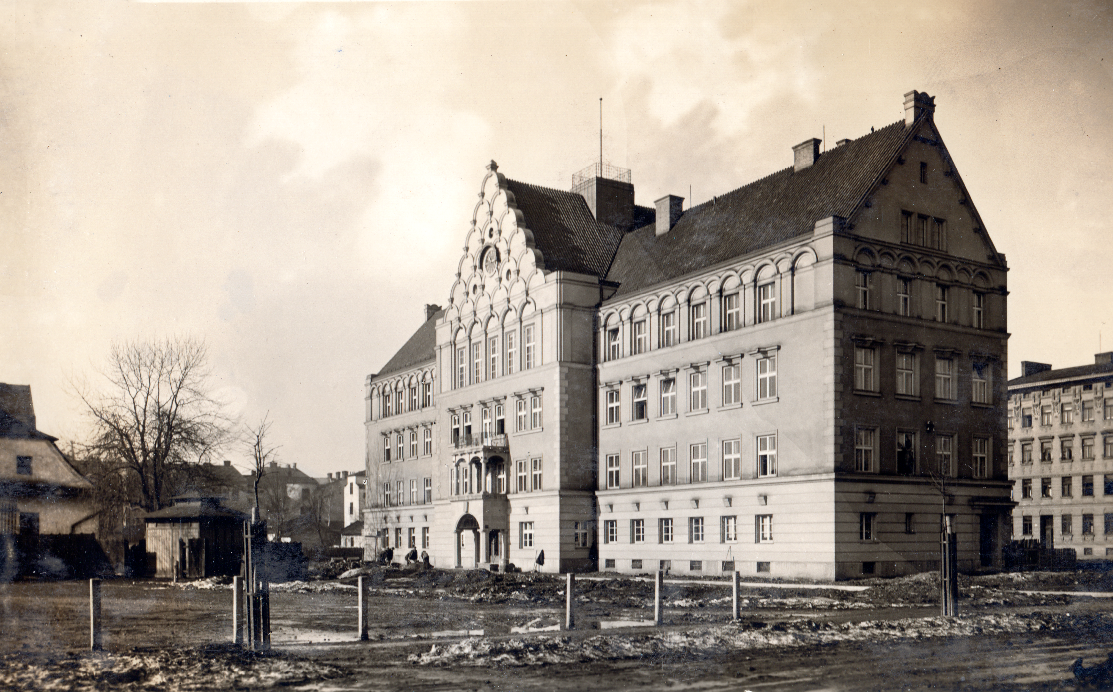 A new town hall in Český Těšín built in 1928 by a Cieszyn construction company of Eugen Fulda according to the design of an Ostravian architect, Wilhelm Richter.

On the left the Tetla Family house, which was demolished in 1924.
( (Cieszyn Silesia Museum collection)

The evolution of the international situation after Munich Conference, held on 29-30th September 1938, had an unquestionable impact on Cieszyn matters.

On 21st September 1938 Józef Beck declared “.... as long as England and France intended to limit their concessions to German Bohemians and Moravian Germans to their autonomy in Czechoslovakia, we demanded autonomy for the Polish minority. When a plebiscite was being considered, we also demanded it for the land inhabited by the Polish minority; when England and France will finally agree to the direct territorial cession, we will demand it to be applied also for Cieszyn Silesia. In response to the Polish diplomatic notes already on 26th September the President of Czechoslovakia, E. Beneš, expressed his preliminary consent to the changes of the borders. At the same time, on the day when the Munich Conference ended, considering its arrangements (to be) threatening the safety of Poland, an ultimatum was presented, the conditions of which were accepted on 1st October. On that day the authorities of Český Těšín began to evacuate the town, and on 2nd October, after a symbolic meeting on the border bridge, the Poles took over. 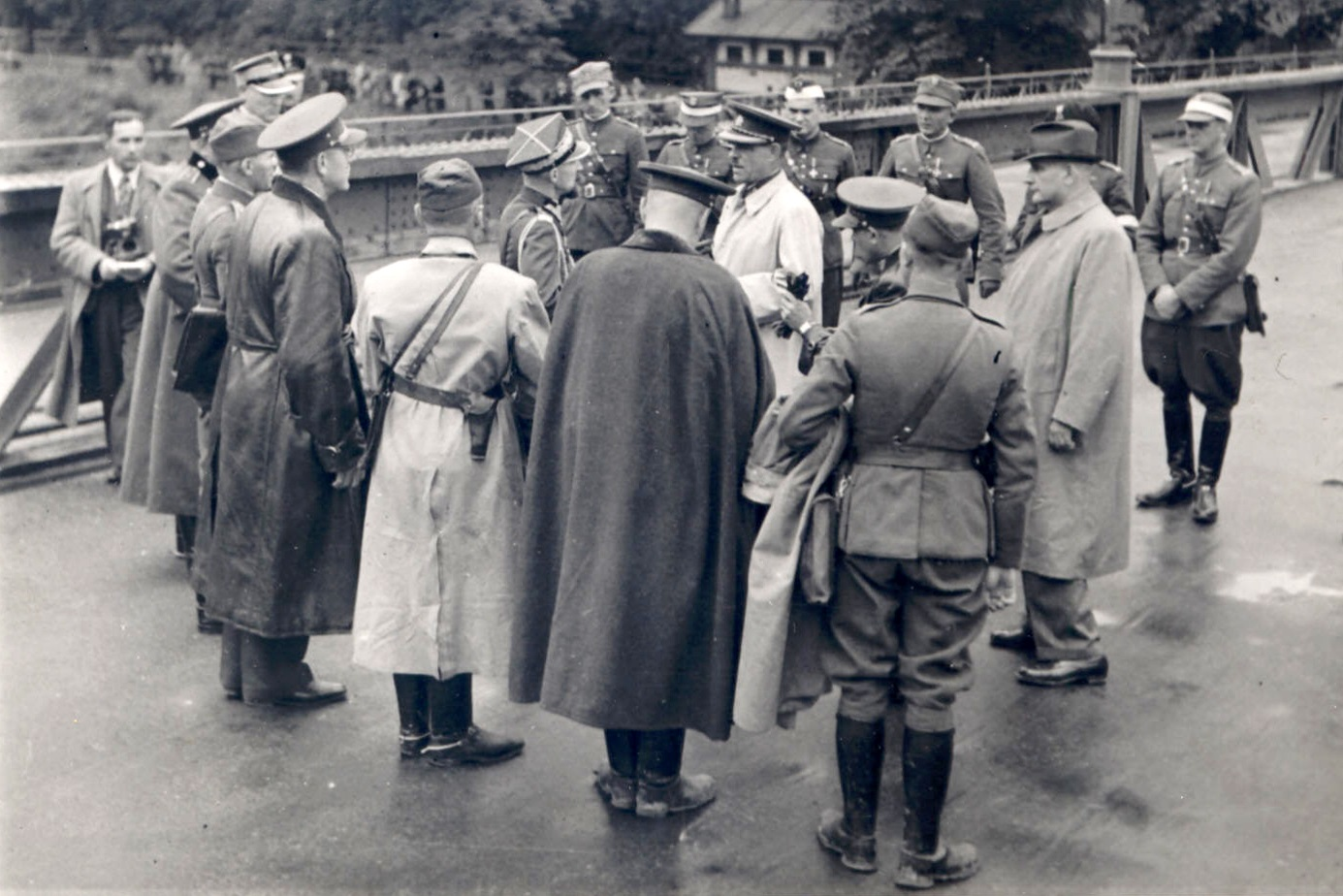 The moment of the transfer of power was described by Franciszek Wantuła from Końska. “I came home and told my wife what was happening. My wife and I picked lots of flowers in the garden. We had 26 varieties of dahlias and many types of roses, gladioli and carnations. We took as much as we were able to carry and headed towards Cieszyn to welcome... There were plenty of people in Cieszyn who arrived from nearby villages, all holding flowers to welcome the Polish army. I had never seen so many people with flowers. By the time we reached the bridge over the Olza river, it had already started. Two Czech generals with white stripes on their caps were giving over Zaolzie to the Polish officers in a humble gesture. We then saw Polish soldiers on trucks, on horses and in tanks. They were literally showered with flowers by civilians and welcomed with enthusiasm.” At that time Štěpán Vadják was also near the bridge. He later recalled that moment: “We were going to welcome the Poles. They were crossing the main bridge on lots of horses. We thought there were plenty of them, as they returned across the second bridge, forming a loop. As young boys back then, we greeted them by chanting: Long live Polish horses! I was young. I did not matter to me at all. It didn’t actually bother me that the Poles were there. It didn’t make any difference to me, because our Polish relatives spoke the way we did.” 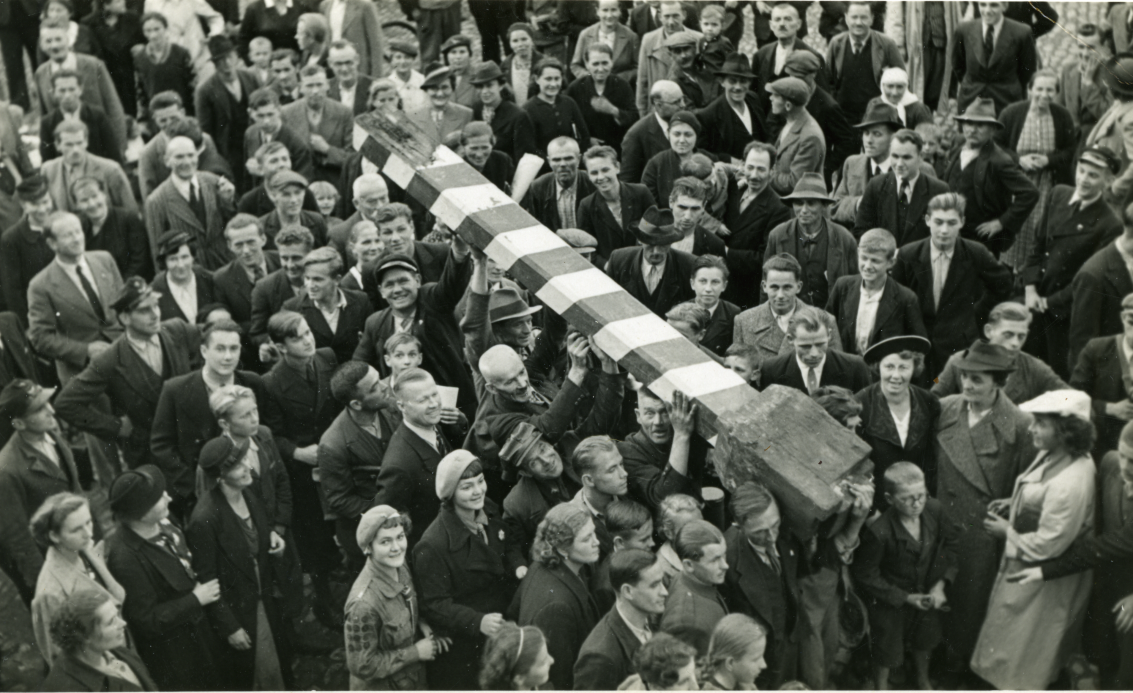 On 2nd October, while taking a tour of the town hall in Český Těšín, in his conversation with Józef Kożdoń, the Silesian governor Michał Grażyński said: “From this day on, this town belongs to the Republic of Poland. And from now on you are the citizens of Poland. Poland brings you freedom and justice! But only to loyal citizens. Poland knows only Polish, Czech and German citizens. It does not acknowledge other elements; undecided, suspended between nations – and it will not tolerate them. Such people cannot count that Poland will protect them.” Those were the last days of Józef Kożdoń’s office. The new commissar mayor of the merged towns was Rudolf Halfar who was supported by the Assistant Council.

The Polish authorities considered the annexation of Zaolzie a historic justice, but at the same time, they did not forget to use that fact for propaganda purposes. Cieszyn was visited by: the Minister of Foreign Affairs of the Republic of Poland, Józef Beck and Marshal Edward Rydz-Śmigły. On 11th November, National Independence Day, Cieszyn welcomed the President of the Republic of Poland, Ignacy Mościcki, and the then Polish Prime Minister, Felicjan Sławoj Składkowski, while in Grabina, in the west part of the town, a grand military parade was held. 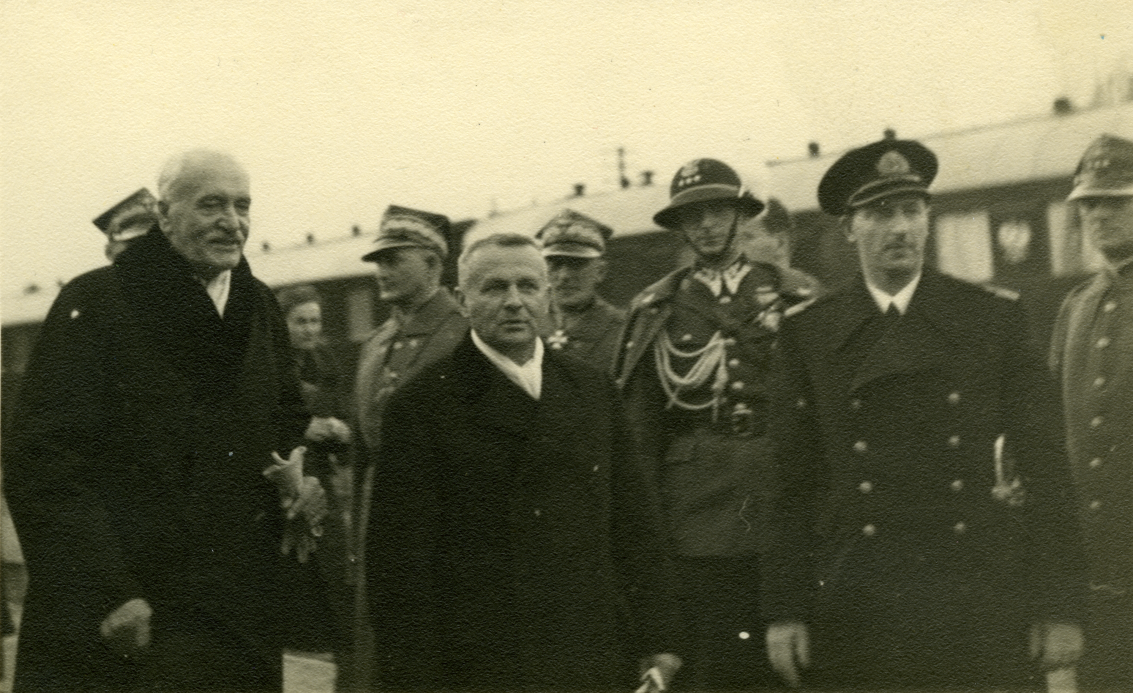 President of the Republic of Poland, Ignacy Mościcki and Governor of Silesia, Michał Grażyński, in Cieszyn

The primary task now was to repolonise West Cieszyn, as well as the entire area of Zaolzie, creating uniquely convenient conditions for the Germans and the Czechs who wanted to leave the territories of Cieszyn Silesia and the very town of Cieszyn. Leon Malhomme, a delegate of the Governor of Silesia, assisting the Commanding Officer of the Independent Operational Group “Śląsk”, wrote in the announcement of 10th October 1938: “Due to the massive return to Silesia on the other side of the Olza river of people who in their tens of thousands were forced to leave their homeland in the years 1919-1938 and move across the border to Poland because of their Polish nationality, we need to efficiently settle the current emigration of people with Czech nationality to Czechoslovakia. Therefore, in order to accelerate the formalities connected with the departure of such people to Czechoslovakia, relevant passes will be issued directly by police stations in urban and rural communes. It is desirable that the interested persons obtain the passes by 1st November this year and leave the territory of Poland.” It is estimated that in the period of a few months, 30,000 Czechs and 5,000 Germans left Cieszyn Silesia of their own free will or by force.

The merged town of Cieszyn was to become the central town of Cieszyn Silesia and through its offices and institutions have influence in the whole region. At that time Polish authorities were busy with the integration of Zaolzie into Poland. Polish residents of the territories annexed under President Ignacy Mościcki’s executive order of 11th September 1938 were granted automatic Polish citizenship. On 6th October the authorities delegalized all non-Polish organizations in the territory of Zaolzie and Polish became the only official language. In this spirit, the majority of street names of West Cieszyn were changed (see: http://stajniaaugiasza.net).

The Anti-Czech policy was evident in numerous displacements, dismissals from work and liquidations of Czech schools.

The new situation was very complicated and it often led to a decline in the standard of living of Zaolzie residents, which proved particularly severe for peasants due to the introduction of low prices for farm produce. It was not until 1939 that labour regulations were unified across work establishments and collective agreements were introduced based on rules applicable across the whole Silesian Voivodeship.

In terms of political life, the Union of Poles in Czechoslovakia, which in March 1938 brought together Polish political groups that were active in Czechoslovakia, in November that year transformed itself into Zaolzie district of the Camp of National Unity headed by Dr Leon Wolf, the District Head in Fryštát and a new Senator of the Republic of Poland. In the face of the ban on the communist party, the role of the sole oppositionist was taken over by socialist groups.

The Polish-Czech conflict was soon overshadowed by Adolf Hitler’s rescission of the German-Polish Non-Aggression Pact in April 1939. Faced with the German threat, the Poles created a uniform anti-German front.