Castle Hill towering over the Olza River is rightfully considered the oldest inhabited part of Cieszyn. In the middle of the 11th century the fortified settlement on the Castle Hill became the centre of the developing administrative unit – castellany. The first written record of Cieszyn dates back to the year 1155. New homesteads were built in the area around the castle, becoming the germ of the medieval town. At the beginning of the 16th century the town was surrounded by walls behind which suburbs gradually developed. 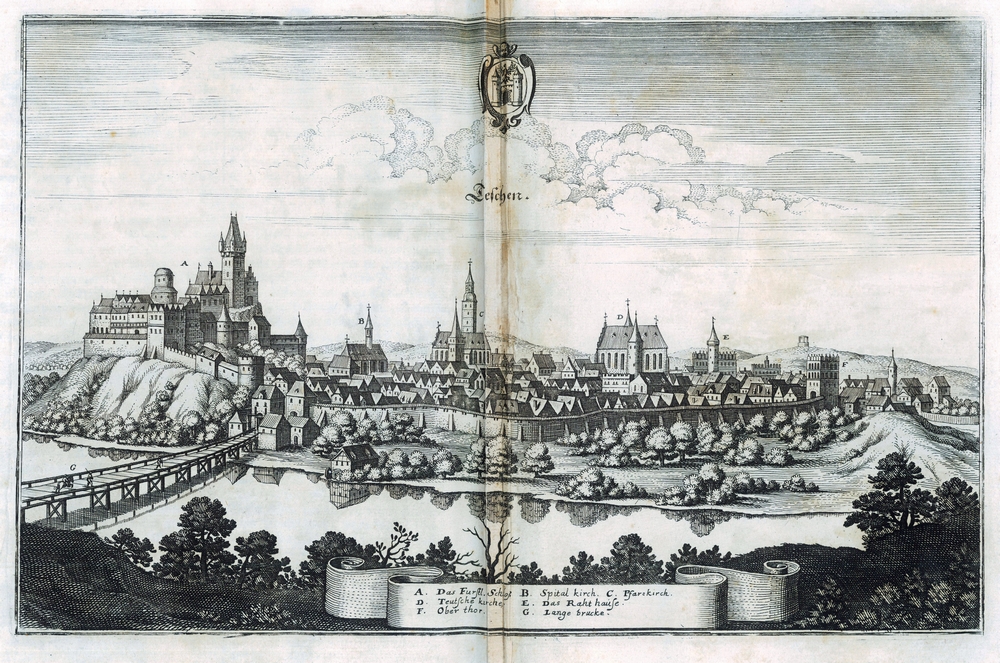 (Down flows the water under the Cieszyn bridge and I can’t stop it...)

The first and the oldest wooden bridge was built at the end of the 14th and beginning of the 15th century in the place of the present-day Friendship Bridge, at the Watergate over the ford on the Olza River. For many years it connected the historical town with the suburbs located on the left bank of the river. Important trade routes led through that bridge and what we also know is that a toll was charged here. After 1781 a stone bridge was built in that place, which in 1891 was replaced by a steel bridge made of lattice girders. Also the name of the bridge changed and it was not only called the Long Bridge, but also the Main Bridge or the Castle Bridge. Between 1911-1921 a tram line ran along the bridge. In 1920 after Teschen Silesia was divided between the Czech Republic and Poland, the bridge became the border bridge. Since then, except for the time between 1938-1945 when the towns re-joined as one, the state border, which opened only after the Czech Republic entered the Schengen Area in December 2007, ran through all Cieszyn bridges.

View of the Castle Hill with the Main Bridge, colored postcard, end of the 19th century, (Muzeum Těšínska Collection)

View from the Castle Hill onto Olza, the Main Bridge visible,  the tenth years of 20th century (Muzeum Těšínska Collection)

The Main Bridge – the border, behind the bridge on the right the visible building of the Imperial Baths, (Muzeum Těšínska Collection)

After the outbreak of World War II, on 1st September 1939 the retreating Polish army blew up all the Cieszyn bridges. The Main Bridge was seriously damaged, just as was Avion café, the cultural centre of pre-war Český Těšín, which had to be pulled down. The Main Bridge, however, was not entirely demolished, and it continued to serve its function throughout the period of occupation. Before the end of the war, on the night of 2nd to 3rd May 1945 German soldiers bombarded all three Cieszyn bridges again in order to delay the progress of the Red Army. Further bridge damage resulted from the flood in 1947. In the years 1950-1953 a new bridge was built, today known as the Friendship Bridge, which joins  Hlavni Street on the Czech side.

The second bridge on the Olza River was opened on 18th August 1903. It was built to celebrate the 55th anniversary of Franz Joseph I’s reign and his 73rd birthday. Although it was named after the Emperor, it was more commonly called “the Jubilee Bridge”. It connected the train station and the centre of the town with a newly designated street running under a hill called Matterówka. In 1918 the bridge was renamed as “the Bridge by the Shooting Range”. In July 1970 a devastating flood washed away the Bridge by the Shooting Range, claiming the lives of five Polish firefighters who kept guard on it. Their bodies were never found. To commemorate them a special plaque was placed on the wall of a house on the Polish side. In 1974 a new reinforced concrete bridge was constructed near the Shooting Range – which operates to this day as the Liberty Bridge.

Jubilee Bridge of Emperor Franz Joseph the 1st, behind the bridge – building of the shooting range, (Muzeum Těšínska Collection)

The third bridge was the railway bridge on the Olza River, built at W Olszynach Street in 1882, which is still used mainly for goods transportation.

At the end of 19th century a Cieszyn builder, Ludwig Kametz, ordered construction of a wooden footbridge at the end of today’s Moskiewska Street in place of the former Mill Gate. Town residents named the footbridge after its initiator – Kametz’s Footbridge (Kametzsteg). After the division of the town in 1920 the footbridge was used as a border crossing until its demolition in 1927. In the same place during World War II a sniper bridge was located, which in 1956 was destroyed in a flood. A new steel bridge, the so-called pass bridge, was built in 1970 in place of the previous footbridge. It served mainly the residents who had the so-called pass (travel document) required in the border zone. The bridge was exposed to many floods and it was eventually demolished in 1982.

In 2003 an initiative was created with the aim of restoring the footbridge in this area. The design of a new footbridge named “Loophole” resembling a symbolic loop designed by French architect Françoise Roche was not never implemented.

As part of the cross-border project “Ciesz się Cieszynem – Ogród dwóch brzegów” [Enjoy Cieszyn ­­– the Garden on both sides of the river], the towns Cieszyn and Český Těšín gained a new landmark. It was the bridge joining the embankments, parks, alleys and sports facilities on both sides of the Olza River. This Sport Bridge is located in the sports and recreational area near Adam Sikora Park, and it is mostly used by pedestrians and cyclists.