The etymology of the name of the Olza River most likely comes from Indo-European languages. According to the researchers of these languages, which included Jan Rozwadowski as well as Hans Krahe, it originates from the word "Aliga", which means water, moisture. This word was then most probably transformed into "Olbga" and "Oldza" (to stink, to rot, figuratively a swamp, mud, or to give off smell). In another interpretation, it can mean "rich in water". The origin of its name from the alder tree (Polish: olcha) or its dialect version (olsza) is considered to be a misinterpretation.

Because the Olza flows through the area of an ethnic and linguistic borderland, its name appears in many different records. For Poles it is Olza or Olsza, for the Czechs also Olza or Olša/Olše, and for Germans Olsa, Elsa-Fluss, Else, Oelsa, Ölsa.

A dispute arose around the name Olza among Polish activists in Cieszyn Silesia at the beginning of the 20th century. It referred to doubts as to whether this name should be written as Olsza or Olza. Some of the researchers seemed to think that the Olsza spelling was closer to Old Polish, while Olza was a Germanic influence. The difficulty in the study of the original form of the name of the Olza River, which functioned here from the earliest times, was the difficulty medieval and somewhat later clerks and chroniclers had with expressing the pronounced name in writing in the official language (hence their inconsistencies). The pages of significant regional magazines having a high level of professionalism became the arena for polemics. In "Miesięcznik Pedagogiczny" - a publication of the Polish Pedagogical Society, it was argued in 1900 that the spelling 'Olsza' would be closer to Polish etymology, while Olza was a Germanic influence. Opinions were strongly divided, and the dispute could not be resolved. On one hand, one of the most important arguments was the spelling used by Jan Długosz who, in his work listing the tributaries of the Odra, wrote "Odra [...] accipit [...] Olszam, qui in Sarmaticis ontibus habet fontem". Polemists of the opposite view argued that only the name Olza was used among the people. It is difficult to suppose that this version, as linguistically more difficult than the word 'Olsza', could have completely ousted it from the language and use by the population living by this river. The issue returned in 1908 in the first year of “Zaranie Śląskie” - the only Polish cultural and literary magazine in Cieszyn Silesia at that time. Argumentation was supported by the field research of Doctor Karol Nitsch from Krakow, recognised as an outstanding expert on linguistics (later a prominent professor at the Jagiellonian University), and Prof. Jan Rozwadowski, a specialist in the etymology of the names of European waters. Both researchers confirmed, deriving the origin of this name from Old European languages, that the Polish sound of the main river in Cieszyn Silesia should be 'Oldza', but it has been simplified to the form 'Olza', which functioned in this form from the earliest times. It is confirmed even by the German name 'Olsa' (pronounced ‘Olza’), because the rules of the German grammar would require the spelling 'Olza' to be pronounced as 'Olca'. Research on the spelling of the name of Olza in the oldest surviving documents, carried out by Franciszek Popiołek, professor at the Polish Gymnasium in Cieszyn and an excellent historian, proved the absolute domination of the 'Olza' form. This research was later confirmed by the Czech dialect researcher Dr. Adolf Kellner. The record from Długosz's chronicle, which caused so much confusion, can be explained by the principles of Polish grammar, which were unspecified in the fifteenth century. In his writings, Długosz did not use a uniform method of spelling, he could also have been trying to improve the pronunciation by assuming the so-called phenomenon of mazuration, which, however, did not occur in Silesian dialects. Thus, Długosz's spelling had to be considered imponderable and not suitable for determining the correctness of the form of the name of the Olza River. In this way the dispute on a purely scientific basis and ongoing only within the framework of the Polish language community has ended, and the functioning form of 'Olza' was considered to be correct.

The conflict revived after 1920, when Cieszyn Silesia was divided between Poland and Czechoslovakia, because the Czech side began to propagate the Olša/Olše spelling. The reasons for this varied. The most trivial one came from cartographic work. The Czech side used map resources taken over from Austria-Hungary, where the river was most often described in the German wording as Olsa and the easiest way to adapt it to the new situation was by adding the accept above the letter 's'. Political and nationalist argumentation forced the historian Václav Davis to argue that the name 'Olše' is closer to the Czech language and the 'Olza' form is an imposed polonisation. His reasoning did not have a scientific basis. For example, in the urbarium from 1577 written in Czech (which was then the clerical language in Cieszyn Silesia), the name Olza occurs ten times, while Olsza or Olša does not appear at all. With time, this type of argument lost its strength and today the form 'Olza' in Czech language is considered to be linguistically correct and is used most often.

Few documents that mention the Olza River survived from the era of the Piasts to our times. The oldest ones were drawn up in Latin, later ones in Czech, which was the language of the Chancellery of the Dukes of Cieszyn.

In a document from January 31, 1290, Prince Mieszko I of Cieszyn gives 10 French fiefs to Bogusz for his faithful service so he may establish a settlement. They were located on both sides of the Olza, and the recipient could freely fish and place mills on the river (spelling of the name in Latin: fluvium Olzam).

Another document in which the Olza River was mentioned, was issued on December 20, 1450, and concerned the confirmation by Przemysław, the Duke of Cieszyn, of the sale of the village of Boguszowice by the knight Mikołaj of Małe Kończyca to Mikołaj of Trzenkowice (Latin: fluvium Olzam). 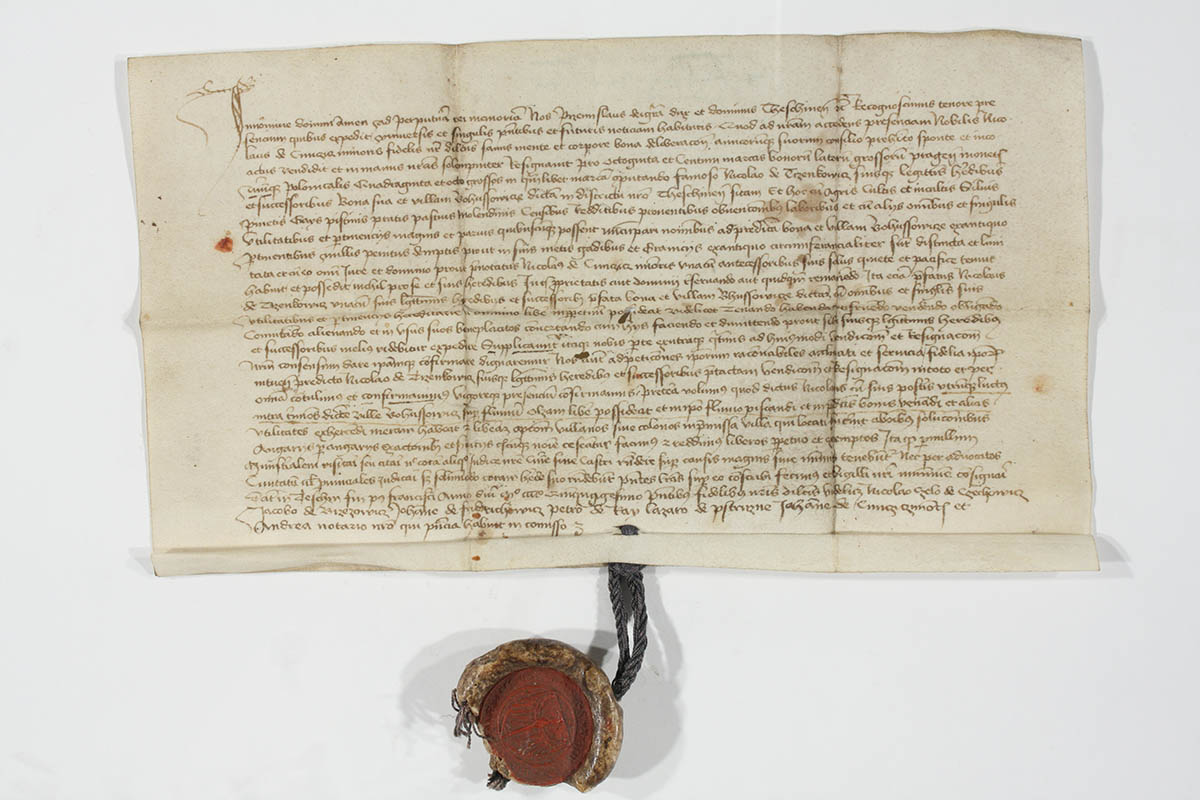 A document in Latin issued in the chancellery of Przemysław, the Duke of Cieszyn dated December 20, 1450 on the sale of the village of Boguszowice. (State Archives Cieszyn, Collection of Parchment Documents, ref. no I/17)

A document from January 6, 1457 informs that Prince Przemysław confirms the sale by Jan Mniszek of Kończyce of his part of the village of Boguszowice to Mikołaj from Strzelkowice (Latin: fluvium Olsam). 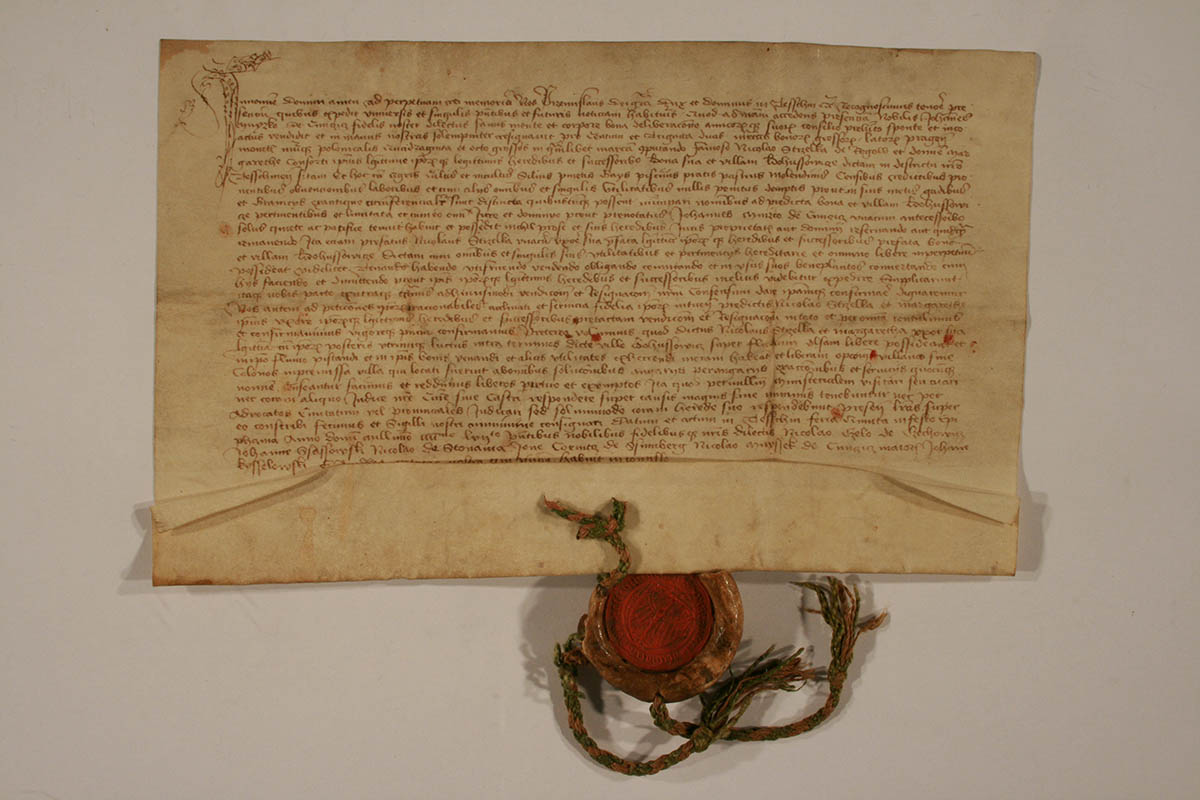 A document in Latin issued in the chancellery of Przemysław, the Duke of Cieszyn, dated January 6, 1457, on another change of the owners of the village of Boguszowice..
(State Archives Cieszyn, Collection of Parchment Documents, ref. no I / 21)

The privilege issued on May 7, 1511 by the Duke of Cieszyn for citizens from Fryštát concerning the right to free fishing on Fridays (Czech: řece Olze).

Two documents have survived from May 27, 1552, in which Prince Wacław confirms to Piotr Czelo of Czechowice the ownership of goods in Wędrynia on the Olza River, located near the forests (Czech spelling: za vodú Olzy; řeku Olzu).

In a document dated May 10, 1563, Prince Wacław confirms to Jan Bielesz the granting to Prince Kazimierz of a forest, a mill and an inn in Bukowiec (Czech: řece Olze).

Urbarium from 1647 informs about the purchase of land lying between the Olza River and Ropica by Adam Rybka from Sibica.

In a document dated 11 April 1573, Prince Wacław confirmed to the town of Cieszyn the purchase of property - a field and a meadow - which constituted a manor belonging to the Jelčar brothers in Górne Przedmieście, for which the town will pay 320 zlotys to the prince (Czech: řeka Olza). 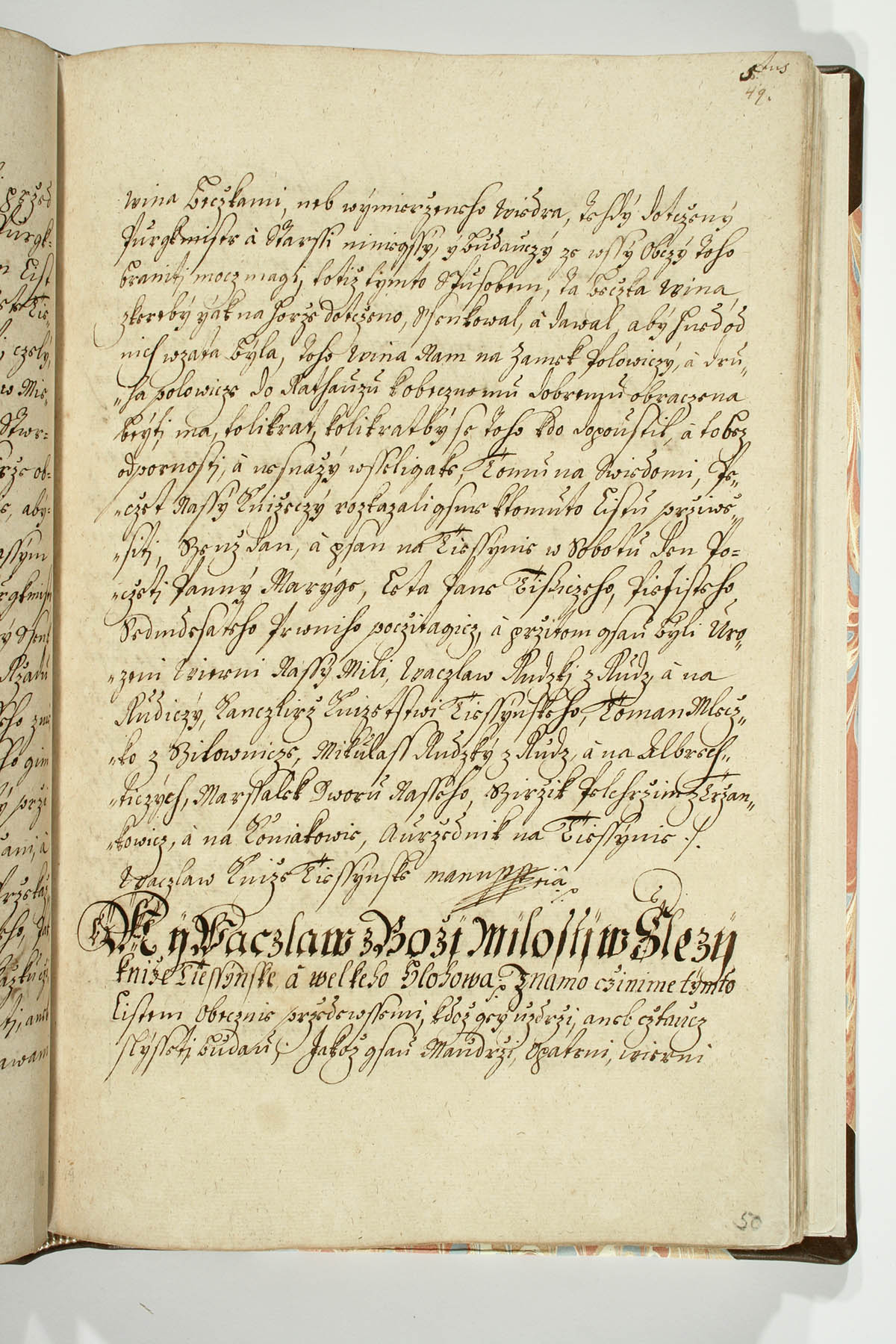 A document in Czech language issued in the chancellery of Wacław, the Duke of Cieszyn, dated April 11, 1573 confirming to the town of Cieszyn the purchase of property in Górne Przedmieście
(State Archive Cieszyn, Cieszyn Chamber Collection, No. 76/1364)

By virtue of a document dated October 14, 1591, Duchess Sydonia Katarzyna confirms that Bartłomiej Fryd, the Duke's starost, purchased for cash a farm from Franciszek Hynal of Kornice, which was located on the Olza, probably on the left bank (Czech: při řece Olze).

A document dated June 27, 1603, which constitutes the privilege of Prince Adam Wacław granted to Maciej Kalus for the use of a malt house built on his property on the left bank behind a long bridge near the prince's castle. (Czech: z obú stran řeki Olzy).

The act of granting dated May 5, 1613, in which Prince Adam Wacław donated to Jerzy Burzej a piece of land on the Olza River on the left bank, next to the duke's manor in Mosty (Czech: na onej stranĕ Olze).

Pursuant to the document dated September 8, 1615, Prince Adam Wacław awarded Pawel Ryba, the prince's cook, for faithful service, with a piece of a meadow called Balina, located between the Olza and the Ropica stream (Czech: mezi řekú Olzú a Ropicu) 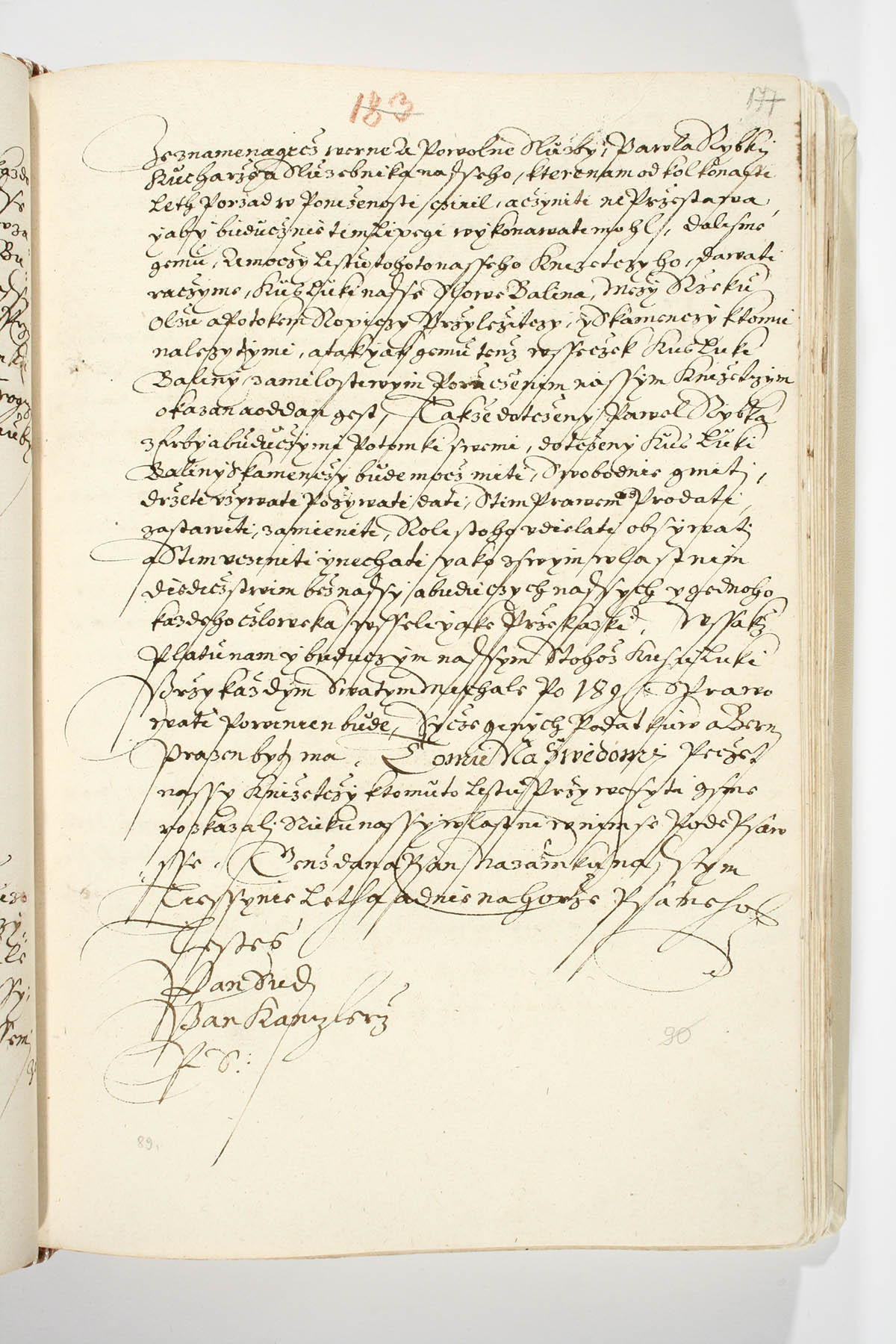 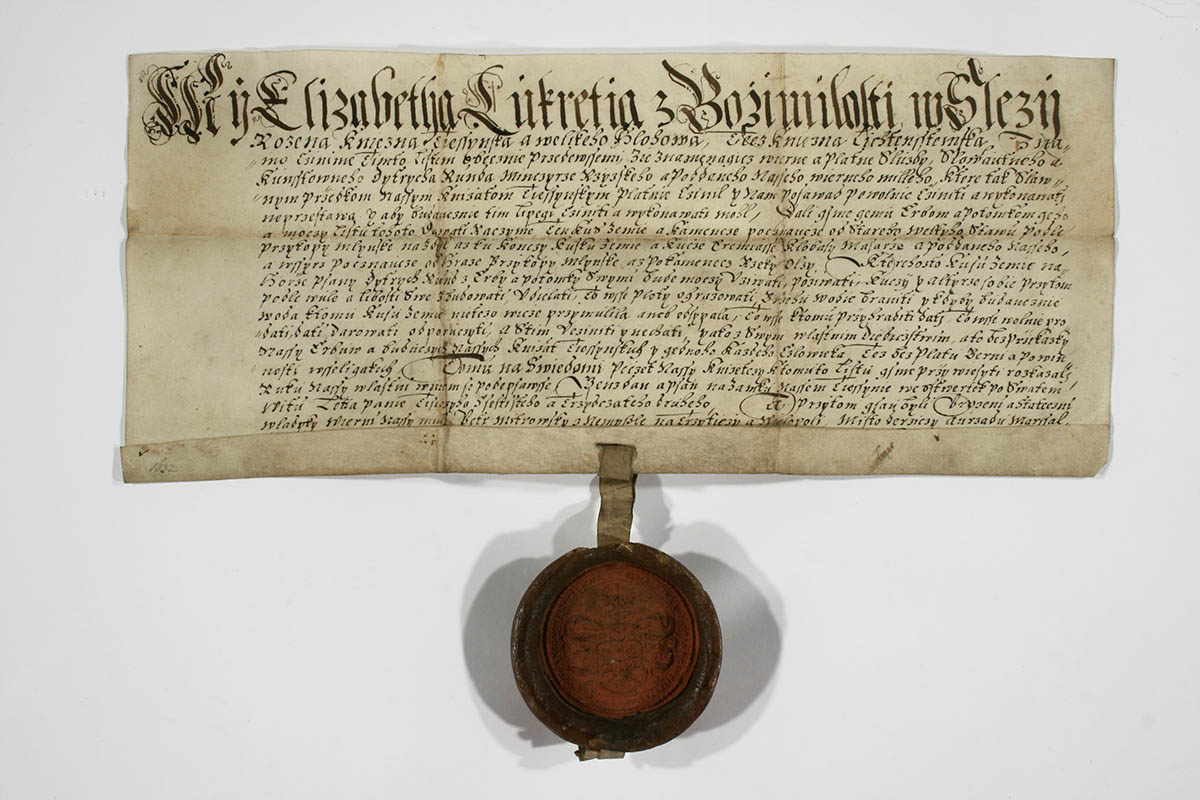 A document in Czech language issued in the chancellery of Elżbieta Lukrecja, the Duchess of Cieszyn, dated June 17, 1632 regarding the donation of real estate located on the Olza River
(State Archive Cieszyn, Collection of Parchment Documents I / 155)

There are also several entries from the Piast dynasty relating to the Olza River in the land book of the town of Cieszyn, covering the years 1620-1670.

Under the date of March 20, 1621, a purchase and sale contract was signed, in which the Cieszyn Starost, Piotr Zajączek from Hostialkowice. confirmed that Piotr Kusków sold a house with a farm on the Olza to Michał Lomozow.

Maksymilian Prockl from Procksdorf, Viceroy of the Prince in Cieszyn confirmed the contract of May 15, 1640, under which Franz Foltyn, a burgher of Cieszyn, on behalf of his wife, Salomea, née Kalasowna, sold a farm located near Brandys along with a barn, malt house and a farm to Jerzy Bajer for 280 zlotys.

Under the date of May 16, 1641, the Prince's Viceroy Maximilian Prockl confirmed the contract concluded on May 8, 1641, under which Frederick Frölich sold for 350 zlotys a farm located between Młynówka na Przykopie and the Olza River. The buyer was Jerzy Maik and his son Adam (Mała Łąka).

The examples cited above show that the oldest forms of the name of the river have the 'Olza; spelling. An attempt to change its name for national and political reasons is not justified, because Polish and Czech linguists agree that the name derives from the Indo-European languages, not the nations that live on its shores today.