A poem entitled “Nad Olzą” (“On the Olza”) and a folk melody which accompanies it became an unofficial anthem of Poles living in Cieszyn Silesia. It is commonly known as “Płyniesz Olzo” (“Olza, Here You Flow”). The author of the lyrics was Jan Kubisz, a poet and a Polish national activist.

He was born on 24 January 1848 in Końska (a village in Zaolzie, nowadays almost non-existent due to the damage caused by Trzyniec Iron and Steel Works). He came from a rural Protestant family. His parents were Paweł and Maria (née Kotas).

The year when he was born was an exceptional year in the history of both his region and the whole of Europe. The Spring of Nations brought about many changes in the social structure of Cieszyn Silesia and in people’s consciousness. Until that time, people could not voice their desires and opinions. Kubisz was both a contemporary and a witness of changes going on in people living in the region. Most importantly, he observed the work which led to the revival of Polish national consciousness in Cieszyn Silesians, the work which lasted over the course of three generations.

In the beginning, he attended a village school in Końska and in 1860 he became a student of the Protestant Gymnasium in Cieszyn. He completed four classes (the so-called lower gymnasium). During his secondary school years, he was fascinated by German culture. This process of moving away from one’s ethnic roots during secondary school education was a common phenomenon at that time. Only a handful of young Silesians were capable of rejecting foreign influences and rebuilding their Polish national identity. When it comes to Jan Kubisz, his attitude changed under the influence of Adam Pinkas, one of his teachers from Końska, and Jerzy Buzek, an agronomist.

Jan Kubisz decided to become a teacher and returned to Cieszyn in 1866 to attend a two-year preparatory school for teachers (it was an establishment which educated village teachers). At that time, his worldview was shaped by figures such as Pastor Leopold Otto and Jan Śliwka, a teacher and the secretary of the Protestant church in Cieszyn. Leopold Otto was an outstanding Polish clergyman who belonged to the Evangelical Church of the Augsburg Confession. He worked in Warsaw, but after the January Uprising, he was under threat of arrest by Russian authorities due to his nationalist activity. That is why he decided to apply for the position of pastor at the Protestant church in Cieszyn. He was appointed in 1867 and worked here for almost a decade. He significantly contributed to reinforcing Polish national identity among Protestants living in Cieszyn Silesia. His close associate was Jan Śliwka, a native Silesian who did a lot for the community living in Cieszyn and in its vicinity. He was also the author of Polish textbooks used in village schools, as well as an authority for Polish Protestant teachers.

Jan Kubisz started working as a teacher in 1868. At first, he worked in the Protestant Village School in Cieszyn, where he stayed for a year. In 1869, he moved to Gnojnik (he lived in this village until the end of his life), where he worked as a teacher and then as the head master of the Protestant Village School (which was later transformed into a public school). Apart from his teaching work, he was an active member of various Polish organizations, such as the People’s Library, where he played in an amateur theatre club. He was also one of the most active members of the Polish Teaching Club established in 1888 in Ustroń, which was turned into the Polish Educational Research Association in 1896.

He cooperated closely with Pastor Franciszek Michejda. After Leopold Otto left Cieszyn, Michejda became the leader of Polish Protestants in Cieszyn Silesia. Kubisz and Michejda were the founding members of the Protestant Village Education Association. It was established in 1881 and its aim was to promote the Polish language and culture through the printed word.

Jan Kubisz believed that teaching was his main vocation in life. Transmitting knowledge and bringing up younger generations were the activities he was devoted to the most. He was a very modest man and never aspired to become a politically exposed person. He focused on performing his duties with due diligence, which was part of the ethos followed by members of the Silesian community.

However, his education and talents also urged him to take up writing.

His poetic debut was in 1868, when he published a poem in Gwiazdka Cieszyńska, a newspaper published since 1848 (at first under the title Tygodnik Cieszyński) by Paweł Stalmach, one of the forefathers of Polish national rebirth. Poems written by Jan Kubisz were usually commemorative and he wrote them on special occasions. They came out under his initials, J.K, and revolved around religious and patriotic themes.

In 1882, Kubisz published a small collection of poems under his pen name Szlązak (the Silesian). The collection was entitled Niezapominajka: kilka wierszy dla szląskiej młodzieży (Forget-me-not: A Few Poems for Silesian Youth, Cieszyn, published by Jerzy Kotula, printed by Henryk Feitzinger, 14 pages). In 1889, he published a collection of poems entitled Śpiewy starego Jakuba (The Songs of Old Jacob, Cieszyn, published by A. Sikora, printed by Karol Prochaska, 28 pages), this time under his own name. A much longer work was a collection entitled Z niwy śląskiej (From the Silesian Land). It was almost 150 pages long and was published in Lviv in 1902 (its co-publisher was the Association of Protestant Village Education). The foreword was written by Kazimierz Wróblewski. In later years, Jan Kubisz published only a few poems, usually on special occasions. In 1889, he wrote a poem entitled “Mojżesz” (“Moses”) for the Polish Teaching Club.

Until today, the literary output of Jan Kubisz is alive in the collective memory of people living in Cieszyn Silesia. Apart from “Płyniesz Olzo”, his best-known work is a song entitled “Ojcowski dom” (“The Father’s House”).

Another work which is of both literary and historical value is his diary which was first published in serial form (since 1919) in Poseł Ewangelicki. In 1928, it was published as a non-serial publication under the following title: Pamiętnik starego nauczyciela. Garść wspomnień z życia śląskiego w okresie budzącego się ruchu narodowego w b. księstwie cieszyńskiem (The Diary of an Old Teacher. A Handful of Memories from Silesian Life at the Time when the National Movement Was Born in the Former Duchy of Cieszyn) (the foreword was written by Reverend Andrzej Buzek and the book was published in Cieszyn by the Protestant Association).

What was particularly important in the literary work of Jan Kubisz was the Olza. It became a symbol of the region, and for the author himself, it was also the synonym of his family home. He was brought up in Końska, a village on the Olza. In his poetry, the Olza is compared to the Jordan, the sacred river of the Chosen People. The motive of baptism and purification in its waters symbolized the rebirth of the Polish identity of Silesians, attachment to the tradition of their ancestors and staying true to the choice these ancestors made. The combination of this religious message and the national motive was inspired by the views held by Reverend Leopold Otto, who saw the role of Protestants in the national rebirth as a task from God.

This context explains the behaviour of the poet, which was very strong in its expression. After Cieszyn Silesia was divided between Poland and Czechoslovakia in 1920, he never crossed the border river which separated his house in Gnojnik from Poland, his Promised Land.

Jan Kubisz died on 26 March 1929 in Gnojnik and was buried in the village cemetery.

He married twice. His first wife was Malwina (née Pustówka) and his second wife was Maria (née Broda). When it comes to his children, Tadeusz (1880-1964) was the owner of a famous photo studio in Cieszyn, Jan (1885-1948) was a prominent doctor and the director of the Silesian Hospital in Cieszyn, Anna (1887-1969) became the wife of Reverend Karol Kotula, Karol Bronisław (1905-1981) was a Protestant clergyman, whereas Andrzej (1905-1998) was a journalist and an editor who took steps to ensure that the memory of his father was kept alive.

Oh, the Olza, here you flow,

in the valley, down below

And the same flowers grow

On your banks in springtime show.

Your swift waters in their run

Were not stirred by anyone;

And shine brightly in the sun

Just as they have always done.

But the people changed their ways

And their lives have gone astray;

For their fathers they don’t care

And old customs turn away.

The same oaks grow where you run

And the same songs they still hum

But the speech of an old man

Is forgotten by his son.

On your banks in the afternoon

The bird sings its olden tune

Yet our songs with pretty croon

Through the ancient Canaan side;

People waited for its tide

Wanting to be purified.

So I just fell to my knee

And prayed to the Almighty:

The Jordan for my men and me! 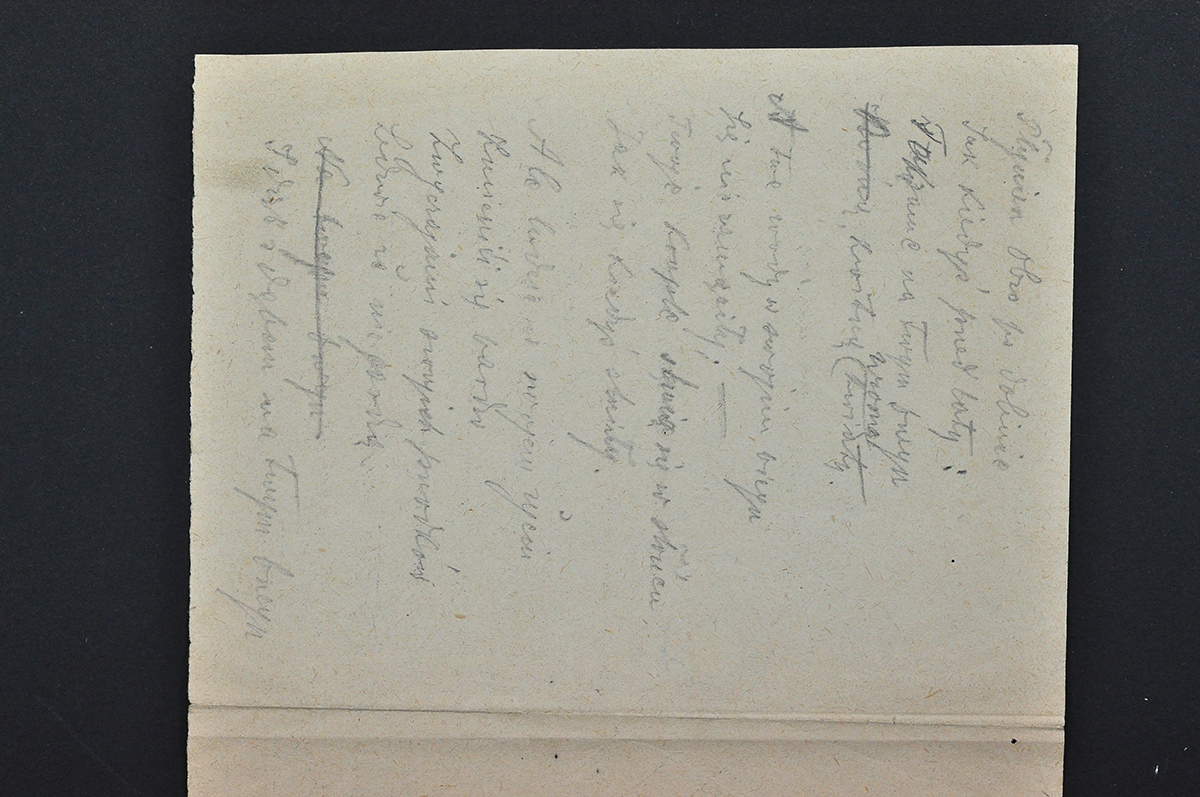 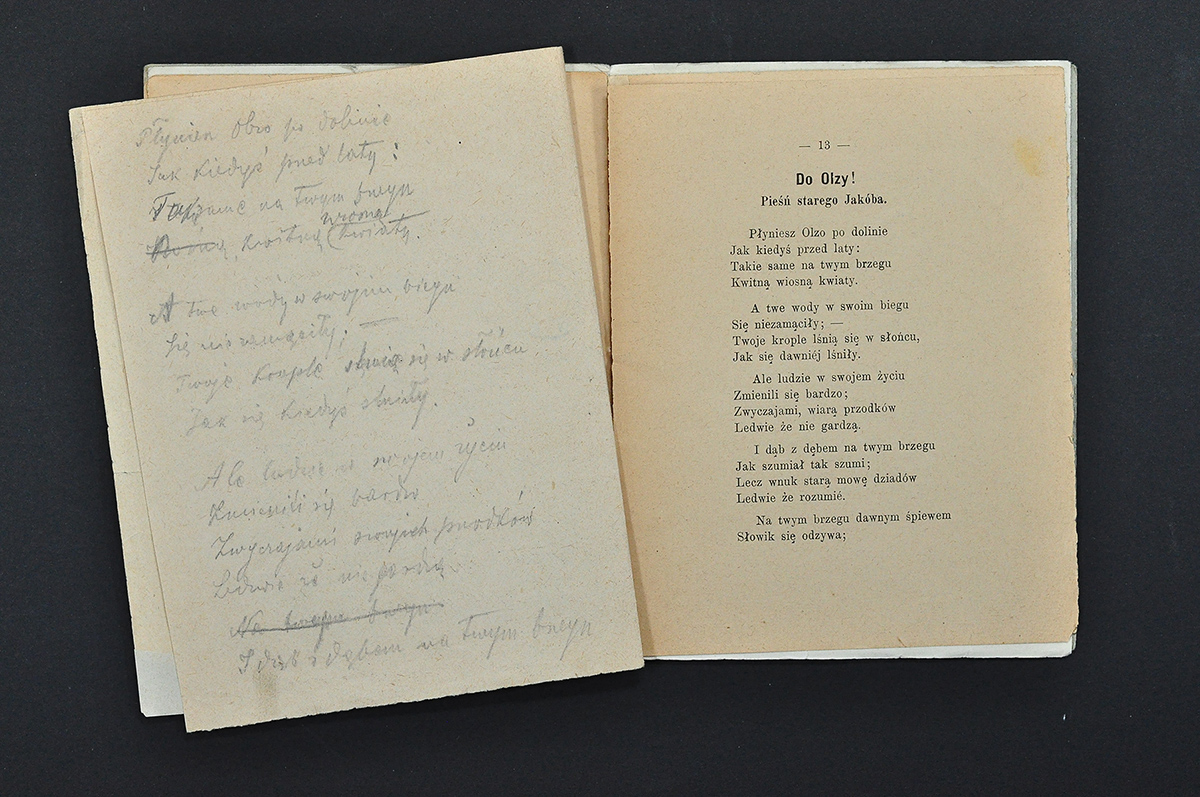 A fragment of the manuscript of the poem by Jan Kubisz and its version in print as it appeared in the volume “Forget-me-not” (“Niezapominajka”) published by the author in 1882 under the pseudonym Szlązak. (Historical Book Library Collection)