The Olza as a brand name

he Olza is one of the most transparent symbols of the region, an element of identification and a clear declaration of attachment to local traditions. No wonder that both in the past and today numerous institutions, companies and social organizations have referred to the Olza in their names.

Since the 19th century, numerous large and small printing companies have operated in Cieszyn. In the 1930s, a small printing company was run in Český Těšín by Robert Kohut. In January 1938, due to financial reasons, he set up a company jointly with the Protestant Society of People’s Education in Český Těšín, thanks to which he gained funds that allowed his company to survive. In October 1938, Zaolzie was taken over by Poland and the composition of the company changed (the Protestant Society was replaced by natural persons). From March 1939, the company operated under the name Olza. Its shareholders were Protestants, so it usually printed publications for this religious community. After the outbreak of the Second World War, the printing house ceased its activities, even though officially it functioned for some more time.

In 1938, the construction of the first ocean-going ship for the Polish merchant navy started in Stocznia Gdynia, a Polish shipyard. In the beginning, it was supposed to be called Zaolzie, but in the end the name Olza was chosen. It reflected important political events of the time. The keel was laid on 28 August 1938. The ship was supposed to be launched on 25 September 1939 and put into use in March 1940. However, these plans were thwarted by the outbreak of the Second World War. The ship-owner was Żegluga Polska. It was supposed to be a small general cargo ship with 3 holds with the capacity of 1080 GRT and a 68-metre long hull, propelled by a steam engine and reaching a speed of up to 10 knots. The crew was supposed to be made up of 18 people. Due to the outbreak of the war, the ship never sailed under the Polish ensign. The damaged and unfinished hull was taken over by the Germans, who treated it as a spoil of war. The planned construction of the ship was very much delayed. Shipbuilders were ordered to work on it only when there was no more urgent work. Until 1941, only the hull was finished and launched. It was decided that further equipping and construction works on the ship, which was to be called Westpreußen, would take place in the port in Liepāja, which had just been captured by Germans. The hull was towed there, but the construction was not completed in the new location. In 1945, the ship was transported to Königsberg, where it fell into the hands of Soviet soldiers. The Soviet Union did not know or did not want to know where the ship came from originally. The construction of the ship was not finished until 1958. It was given a different propulsion (a combustion engine instead of a steam engine) and it carried supplies for the Soviet ocean-going fishing fleet. It sailed under the name Inguł until 1970, when it was withdrawn and scrapped.

As a side note, it is worth mentioning that another ship belonging to Żegluga Polska was launched as early as in 1932. It was built in a Danish shipyard in Nakskov and sailed under the name Cieszyn. It was also a general cargo ship with steam propulsion, three holds with total capacity of 1386 GRT, a 74.5-metre hull, speed of 10 knots and a crew made up of 27 people. Moreover, it could take 12 passengers. During the Second World War, it was used for sea transportation by the Allied forces. Together with its twin ship Śląsk, it became famous for the bold escape from Kaolack, a port in former French West Africa, on 7 July 1940. Cieszyn and Śląsk escaped when local authorities, subordinate to the collaborationist Vichy regime, wanted to ground Allied ships staying in ports under its jurisdiction. Cieszyn reached the United Kingdom and sailed in Allied convoys. It was sunk in an attack of German air forces on 20 March 1941, near Falmouth. Śląsk, its twin, survived the war and continued sailing until 1967, when it was scrapped.

In the inter-war period, there were two independent companies which manufactured confectionery in Cieszyn. They were the predecessors of our today’s factory. The Delta Chocolate and Candy Factory was established in 1920 and located at Błogocka Street. Depending on the economic situation, it employed from 50 to 100 people. In 1938, it was turned into the Cieszyn Chocolate and Chocolate Products Factory. The second company was the Silesian Chocolate and Cocoa Factory, established in 1924. It was originally located at Głęboka Street, but in 1927 it was moved to Liburnia Street. Its name was changed to Wafer, Fruit Cake and Biscuit Factory. It had from 200 to 500 employees. Both companies were privately-owned and their owners changed (often within one family). During the Nazi occupation, both factories were under the compulsory administration of Nazi authorities. At the end of the Second World War they ceased production and some of their assets were exported. When the war ended, they were taken over by the state. Their pre-war names were restored and manufacturing started anew in 1946.

In 1949, they were merged into one company called Cieszyn United Factories of Candy and Chocolate. The former companies became Factory no. 1 and 2. One year later, the company was given a new name: Olza Confectionery Factory in Cieszyn (Zakłady Przemysłu Cukierniczego “Olza” w Cieszynie). The factory slowly increased production. Its products achieved high quality, which was confirmed by orders from abroad that started coming in 1958. At the same time (in 1955 to be precise), the company started manufacturing its best known product, a chocolate bar called Prince Polo. Since 1955, these chocolate bars have been available in different flavours. In 1965, 671 employees (mainly women) were employed in Olza.

In 1966, the factory became part of Silesian Confectionery Factories with its registered office in Siemianowice (apart from Olza, there was also Hanka, a company with factories in Siemianowice and Będzin). The business profile became specialized and included dragées, coated and uncoated wafers and chocolate drops. After further reorganizations, the companies were unbundled in the 1980s. This time, factories in Żywiec and Mszana were subordinated to the company in Cieszyn (it was most probably the result of administrative changes and the emergence of Bielsko-Biała Voivodeship). At that time, there were about 800 employees. The company exported about 13% of its products, for example to Arab countries and North America.

After the political transformation in Poland, Olza Factory was privatized in March 1993 and became part of Kraft Jacobs Suchard. The former logo with a bear sitting on a tree trunk was changed into a silhouette of walking bear. Since 2013, the factory in Cieszyn has been part of Mondelēz International.

After the Second World War, in 1947, sports enthusiasts from Pogwizdów, a village located on the Olza on the north of Cieszyn, established Olza People’s Sporting Club (Ludowy Klub Sportowy „Olza”). Its main goal was to form a football team, which in the beginning had to play matches on a pitch in Marklowice near Cieszyn. Sometime later, the team started using a pitch in their village. The pitch was located near the watchtower of Border Guard Troops. Finally, on 15 September 1963, the club’s own pitch was opened (today, it belongs to the sports centre at the primary school). The players’ skills and the club’s capabilities allow the team to play in B-Class or A-Class matches. However, it needs to be noted that the club has been functioning continuously for almost 70 years, despite the political transformation and the changing lifestyle.

Olza Song and Dance Ensemble (Zespół Pieśni i Tańca „Olza”) is the name of a folk group representing the Polish ethnic minority in the Czech Republic.

Its beginnings date back to 1953, when participants of a folk dance course decided to establish the District Dance Ensemble at the District Board of the Polish Cultural and Educational Association. The word “Olza” was added to the name in 1957. In 1960, when the group reached a high artistic level, its name was changed to the Olza Representative Song and Dance Ensemble at the Executive Council of the Polish Cultural and Educational Association. Its first art director was Janina Marcinkowa, who was also a member of a similar organization from the Polish side of Cieszyn Silesia, namely the Song and Dance Ensemble of the Cieszyn Region. Both ensembles promote extremely rich Cieszyn folklore.

Olza Song and Dance Enseble presented its first individual artistic programme on 24 March 1956 in Piast Hotel in Český Těšín. Since that time, it has participated in the most important folk events organized by Poles in Zaolzie (festivals organized by the Polish Cultural and Educational Association, Gorolski Święto, etc.), it gave many performances in Czechoslovakia (until 1992) and then in the Czech Republic. Obviously, it has also toured in Poland and abroad, where it often played in areas with high concentrations of Polish ethnic minorities, especially in Europe and North America. In 2014, there was also established a children’s ensemble called the Little Olza (Mała Olza).

The high artistic level of the ensemble is evidenced by numerous awards it has won. The most important ones are Oskar Kolberg Award and Józef Ligoń Award. 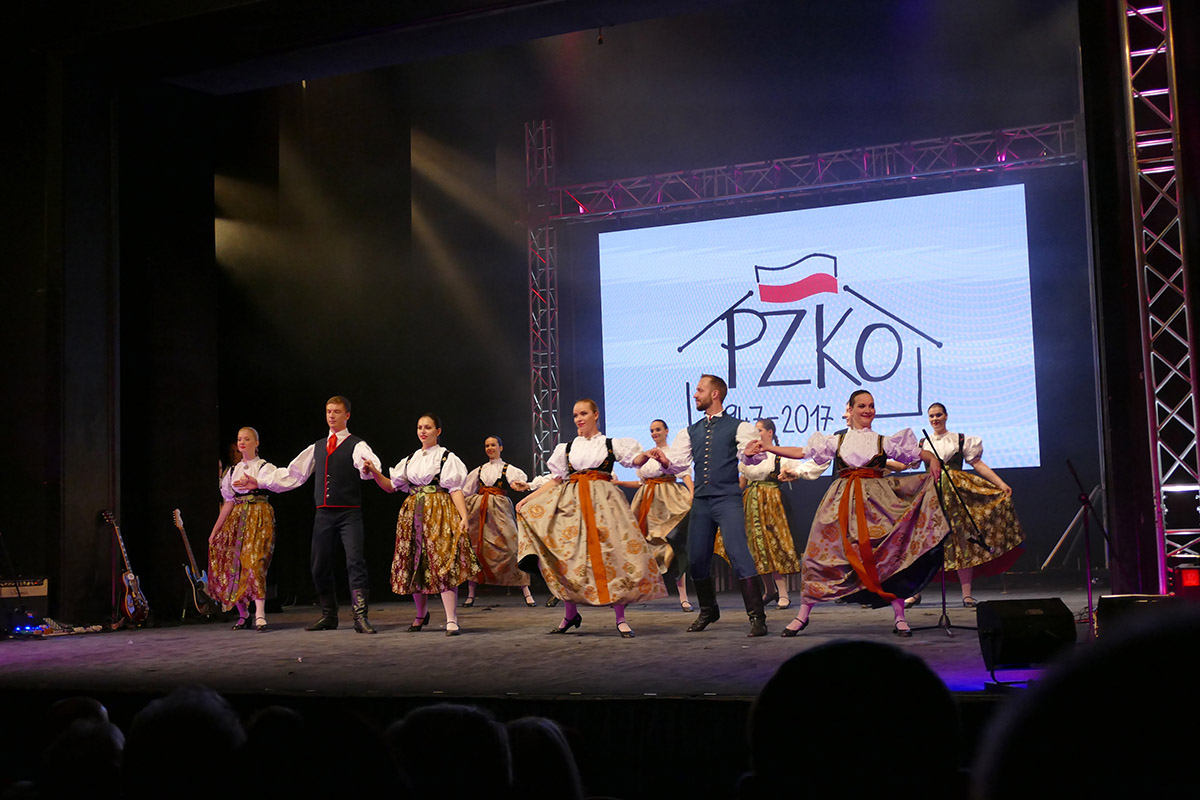 Song and Dance Ensemble "Olza" at the gala on the occasion of the 70th anniversary of PZKO, 2017. (Photo ZD KP Collection)

Olza Publishing House of the Polish Council in the Czech Republic

After the fall of communism in Czechoslovakia and the break-up of this country, the Polish minority living in Zaolzie planned to create a joint representation of its numerous organizations. The Congress of Poles in the Czech Republic accepted this task. A new company was created in order to make it possible for this organization to issue its own publications. It was subordinate to the Polish Council, that is the executive body of the Congress. The new publishing company was called Olza. In the years 1992-2002, it printed numerous publications published by the Polish community in the Czech Republic. In later years, the company was wound up and its publishing activity was continued directly by the Polish Congress. 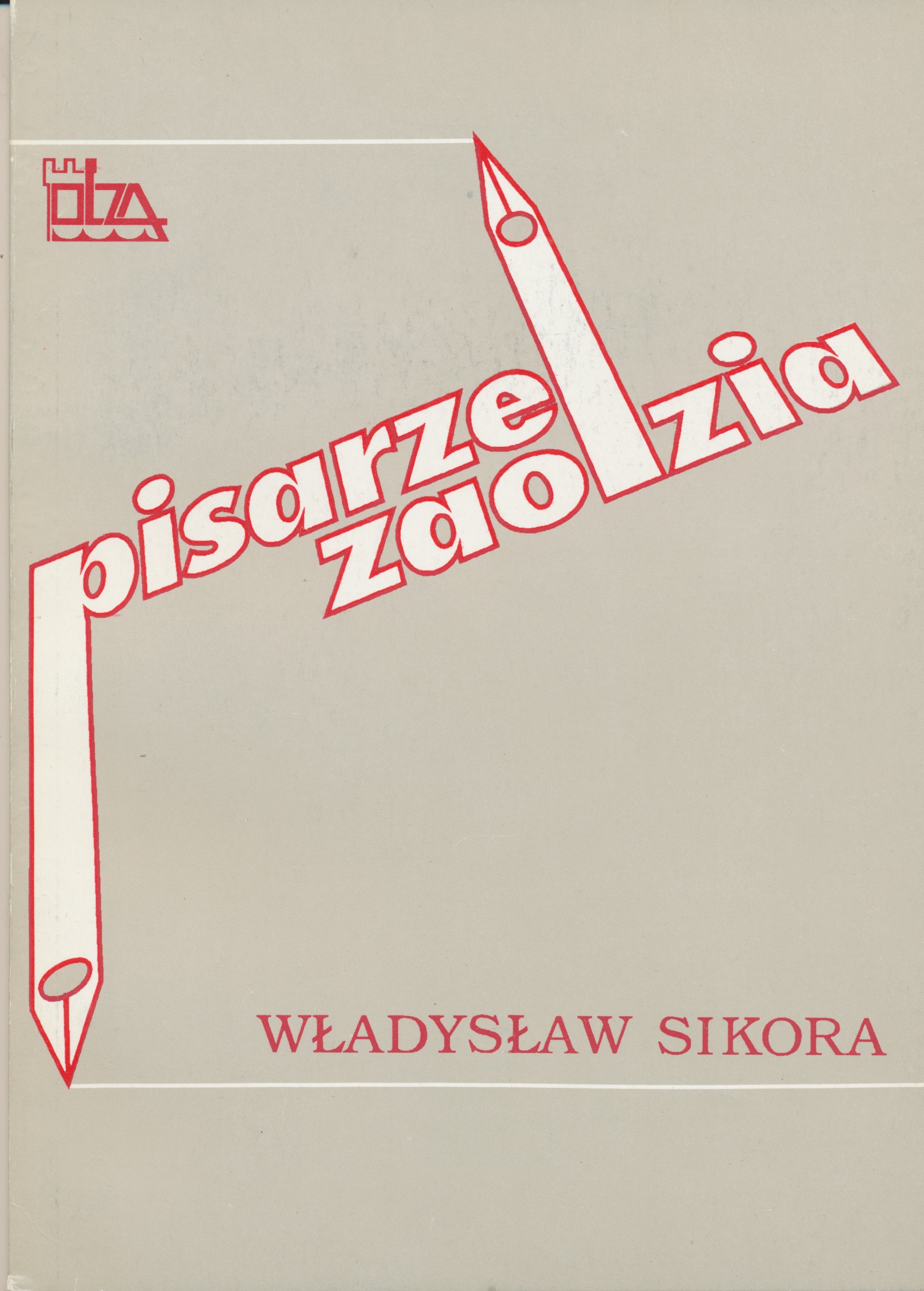 In the 1990s, local authorities governing the communes located in Cieszyn Silesia were making efforts for Euroregion Cieszyn Silesia to be created here. To achieve this goal, local-governments which were members of the Municipal Association of Cieszyn Silesia, as well as the local-governments of Jastrzębie-Zdrój and Zebrzydowice, concluded an agreement pursuant to which on 30 March 1998 the Olza Association for Regional Development and Cooperation (Stowarzyszenie Rozwoju i Współpracy Regionalnej „Olza”) came into being. Its founding members were the following communes: Brenna, Chybie, Cieszyn, Dębowiec, Goleszów, Hażlach, Istebna, Jastrzębie-Zdrój, Jaworze, Skoczów, Strumień, Ustroń, Wisła and Zebrzydowice. In the same year, they were joined by Jasienica commune. After a reform of the self-government administration, the Association was joined by Cieszyn district (2000) and in 2003 also by Godów commune.

Euroregion Śląsk Cieszyński – Euroregion Tĕšínské Slezsko - Euroregion Cieszyn Silesia was created on 22 April 1998. It covers an area of about 1400 square km and its population is about 630 thousand people. The Czech counterpart of the Olza Association for Regional Development and Cooperation which co-created the Euroregion is Regionální sdružení územní spolupráci Tĕšínského Slezska, whose members are 41 Czech communes. The area of the Euroregion does not exactly coincide with historical borders of Cieszyn Silesia. 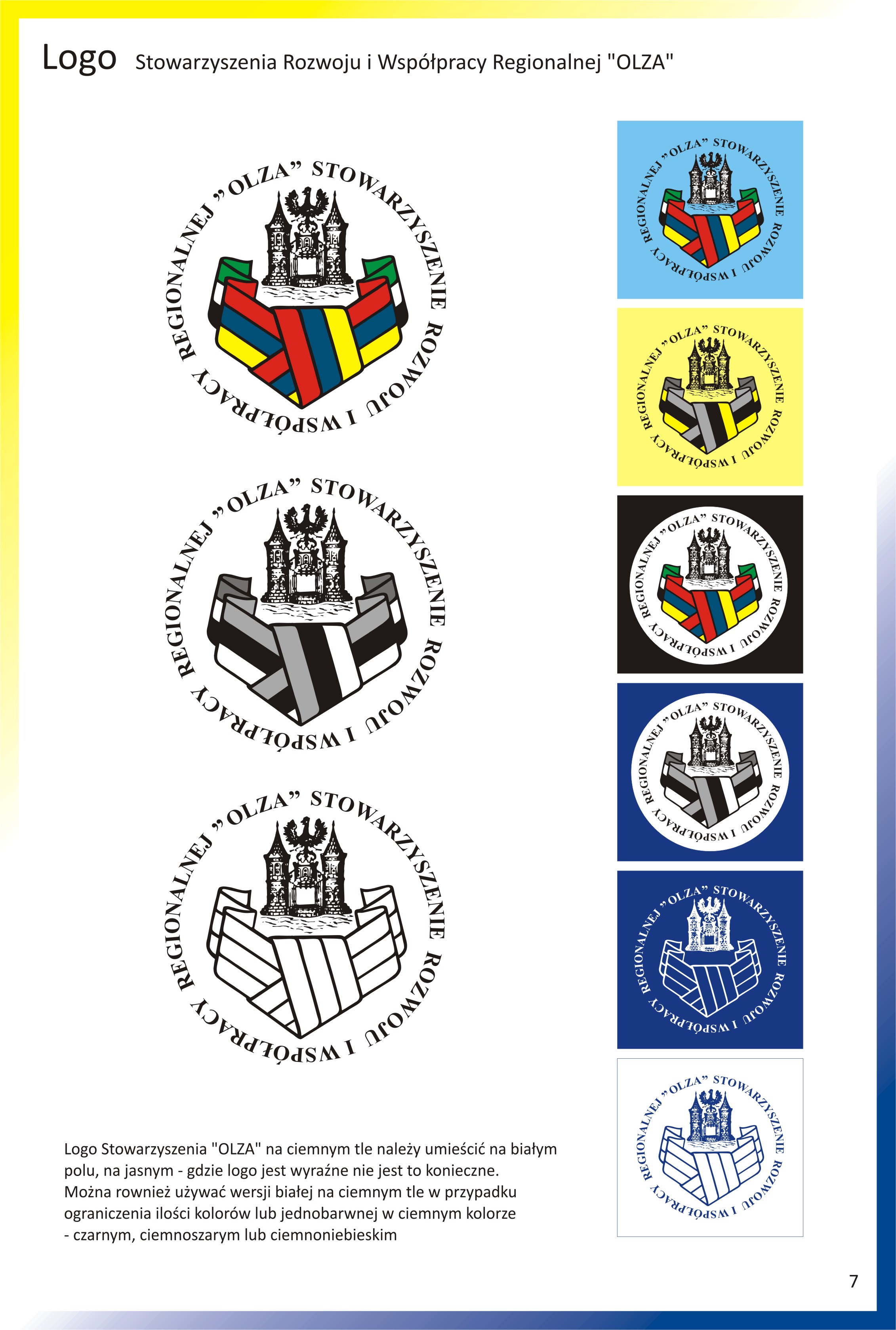 The logo of the Olza Association for Regional Development and Cooperation