Młynówka, a canal which was dug in the Middle Ages, went around Cieszyn and the Castle Hill, next to the Olza River. From the very beginning, it played a vital role in the economic life of the town. On the bank of the canal, there were four industrial buildings: two flour mills, a fulling mill and a copper forge. Młynówka run around the Castle Hill. The copper forge was built by its arm near the bergfried, by the north-east flank of the castle. It is confirmed by documents from 1560 which state that the forge is located next to the Small Mill by the castle and by sources from 1624, which describe the location of the forge as follows: in front of Frysztacka Gate, near the Big Ditch, past the Small Mill. It is possible that the building dated back to the Middle Ages, but unfortunately it cannot be confirmed, as it was not mentioned in historical sources until 1560. It was the only such building in Cieszyn and its vicinity. It was also called the copper furnace or the boiler forge. It manufactured copper pots and boilers for breweries and households, including the castle kitchen. In the modern period, it was a lucrative job and from 1560 to the second half of the 18th century coppersmiths from Cieszyn were among some of the richest townsmen. Even though their workshop was located outside the city wall, they enjoyed Cieszyn town privileges and their houses were located in the best neighbourhoods. The water needed to put forging equipment into motion was drawn from Młynówka and then carried away by its arm straight to Bobrówka. This part of the watercourse is visible in a depiction of Cieszyn from 1646, when the Habsburg army besieged Swedes defending the castle. However, it does not appear in the city map from the second half of the 18th century, which might indicate that the forge gradually lost significance and was closed down, and the arm of Młynówka was filled in. It is possible that the smelter in Ustroniu was a serious competitor which finally led to the fall of the forge in Cieszyn.

The first known owner of the forge was Barbara, the wife of a coppersmith from Cieszyn. When he died, the title to the property situated by the castle was transferred to the widow. In 1560, it was confirmed by two certificates issued by duke Wenceslaus III Adam. The first certificate, dated 5th February 1560, obliges Barbara to repair copper utensils from the castle kitchen and big boilers from the brewery in Cieszyn. If representatives of other crafts who manufactured copperware arrived in Cieszyn, ducal officials were supposed to ensure that the position of the coppersmith remained unchanged. At the same time, the dynast from Cieszyn confirmed that he would grant the forge open access to water, which was necessary for it to operate, and that he would disregard any objections which could be raised by the miller, whose mill was also powered by Młynówka. Each year, the coppersmith had to pay the duke 7 zlotys. Soon, this obligation was amended. In 1577, the following amounts were entered into the urbarium of the estate which belonged to the ducal demesne: the coppersmith, as a suburbanite, was supposed to pay 4 zlotys for the forge on St George’s Day and St Michael’s Day, as well as 6 groszy for his house on Epiphany and on St John’s Day. Barbara soon transferred the property to her son Mateusz. In 1560, after he became a coppersmith, he married Estera, the daughter of Balcar Francz, a townsman from Racibórz. In the same year another coppersmith, Andrzej, arrived in Cieszyn and bought the house of late Banclik. The house stood in the town. There are is no information about his involvement in the forge.

After this year, there were no mentions of the forge nor any coppersmith for two and a half decades. It was not until 1586 that another coppersmith, late Mikołaj Heinel, was mentioned. After his death, his wife Marta bought a house in Cieszyn at Niemiecka Street, which is today known as Mennicza Street. This transaction indicated that the forge was transferred to its heir, and Marta moved to the house at Niemiecka Street, which used to be a prestigious address at the time. It is confirmed by historical sources that the son of Marta Hawel (or Galen, as the German version has it) managed the mill in 1591. The inheritance from Mikołaj Heinel was finally settled in 1597. It was then that a document which divided the estate between his sons, Hawel and Jan (who must have been younger and probably came of age that year), was entered into the ledger of the estate that belonged to the ducal demesne. In view of the urbarium from 1621, Hawel was obliged to pay 3 zlotys 18 groszy on St George’s Day and 3 zlotys 18 groszy on St Michael’s Day, as well as 6 groszy for the house on Epiphany and the same amount on St John’s Day.

Hawel’s wife was Anna. We only know that she died on 5th November 1607 and was buried in St. George’s Church in the suburb of Cieszyn. Anna rests on the left side of the altar. The coffin was covered with a stone slab measuring 161x69 cm. A laurel wreath with a ribbon, divided in half by a mill shaft, was carved on top of it. On the left, there is a geometric house mark with an upside down number seven, a vertical line and initials GH and AH on opposite sides. A German inscription not only notes the date of death, but also indicates that Anna’s parents, children, brother and sister were buried in the same church. It reads as follows: Im Jahr 1607 den V November ist zwischen 12 und 1 der helben Uhr seliglich entschlafen die erbre tugensame frau Anna Haeinelin des rebaren vorsichtigen meister Galen Heinels Kupferschmied in Teschen ehelichen Hausfrauen und liegt alhier mit ihren Kindern, Vater, Mutter, Bruder und Schwestern begraben. Gott wolle ihnen ein fröhliche auferstehung und uns alle geben und verleihen heiligen begraben gros und klein ehren maghen diesen Stein durch den tod hab genomen ich des ewigs leben Trost ich mich. Memento Mori. Over time, Hawel married again. His second wife was Zofia, about whom we do not know much. In May 1623, Hawel wrote his last will and most probably died in the second half of that year. He left his wife and Mateusz, his son from his first marriage, as well as the forge, the fulling mill and a farmstead. Widowed Zofia married again around 1625. Her second husband was Jan, a townsman from Cieszyn, the son of late Jerzy Mareis. Mateusz Heinel appeared in historical sources in 1635, when the governor of the ducal estate in Cieszyn confirmed his right to inherit from his father. He was a coppersmith by profession, but we do not know where he worked.

After at least three generations of the Heinel family, the mill passed into the hands of new owners. At the beginning of 1624, the inheritance estate was divided in the chancellery of the ducal chamber in Cieszyn castle. A sale agreement concluded by Zofia and Hanusz (Jan) Reilbacher was then confirmed in the same office. Zofia agreed to sell the property which she inherited from her husband to Reilbacher, a coppersmith from Opava. According to the urbarium from 1647, Jan Reilbacher, the coppersmith residing in the suburbs, was obliged to pay annual fees for the forge and farmstead, namely 3 florins 18 groszy on St George’s Day and St Michael’s Day, as well as 6 groszy for the house on Epiphany and St John’s Day. Reilbacher quickly joined the social elite of the town, which was definitively confirmed on 20th March 1630, when he was allowed to enjoy town privileges. On 9th June 1639, he sold the house in the suburbs to Jerzy Rumpel for 240 zlotys. Reilbacher’s profession was lucrative and allowed him to invest money. On 18th May 1644, he entered into an agreement with Fabian Stawski, a valet of duchess Elizabeth Lucretia, and bought from him a farmhouse located in Mała Łąka (Little Meadow), on the mill ditch near the forge, for 180 zlotys and a measure of vodka.

On 14th May 1652, Jan Reilbacher Junior entered into an agreement with his grandfather and bought the forge, the farmstead and the house from him for 400 zlotys. The sister of Jan Junior was Marianna, who married Wilhelm Reis, a townsman from one of the best families. The new owner kept enlarging the property. On 4th March 1658, he bought a field with a barn from Eliasz Tarnoczy for 575 zlotys. It was located in Mała Łąka between the land belonging to Andrzej Hossak, a smith, and Adam Puczek, also a smith. Some time after the death of Jan Reilbacher, on 20th April 1689, his daughters Juliana (whose married name was Jagosz) and Anna entered into a settlement concerning the inheritance estate left by their father, namely the forge and the farmstead. Under this settlement, the new owner was Jan Ferdynand Jagosz (born around 1667), the son of the aforementioned Juliana. On 28th March the title to the forge was finally settled. Spouses Ferdynand and Juliana Jagosz (née Reilbacher) transferred all their rights to the copper forge, the house and the farmstead, which were subject to Burgrecht and located in the suburbs past Frysztacka Gate, to their son Jan Ferdynand Jagosz, a coppersmith from Cieszyn. When the forge was taken over by Jan Ferdynand in 1692, its condition was really bad, so a considerable amount of money was needed to start it up. Jan Ferdynand died on 14th February 1737, aged 70, and was buried in the graveyard adjacent to Mary Magdalene’s Church in Cieszyn.

The new owner was Franciszek Józef Jagosz, a son of the deceased. However, he was not a coppersmith by profession. He worked in the chancellery of the district office in Cieszyn, first as a writer (1725-1736), and then as a German and Czech secretary (1737-1777). It had a bearing on the fate of the forge, which was lent to somebody for use. This fact, as well as the development of the smelter in Ustroń, led to the fall of the forge in Cieszyn. When Franciszek Józef was still alive, the forge was closed, the arm of Młynówka was filled in and the property became a farmstead. With time, it was numbered Mała Łąka 1. Franciszek died between 1777 and 1780. On 2nd May 1780, the property ceased to belong to the Jagosz family. It was sold by the heirs of Franciszek, his son and daughters: Antoni Jagosz, an official, Anna Szalszowa (née Jagosz) and Josefa Szersznikowa (née Jagosz), the second wife of Jan Antoni, the father of Rev. Leopold Jan Szersznik. The new owner of the land where the forge used to stand was Teresa Kałużowa (née Heman). This is the end of the history of the copper forge in Cieszyn, which was at least two hundred years old. Now the brewery stands in its place. 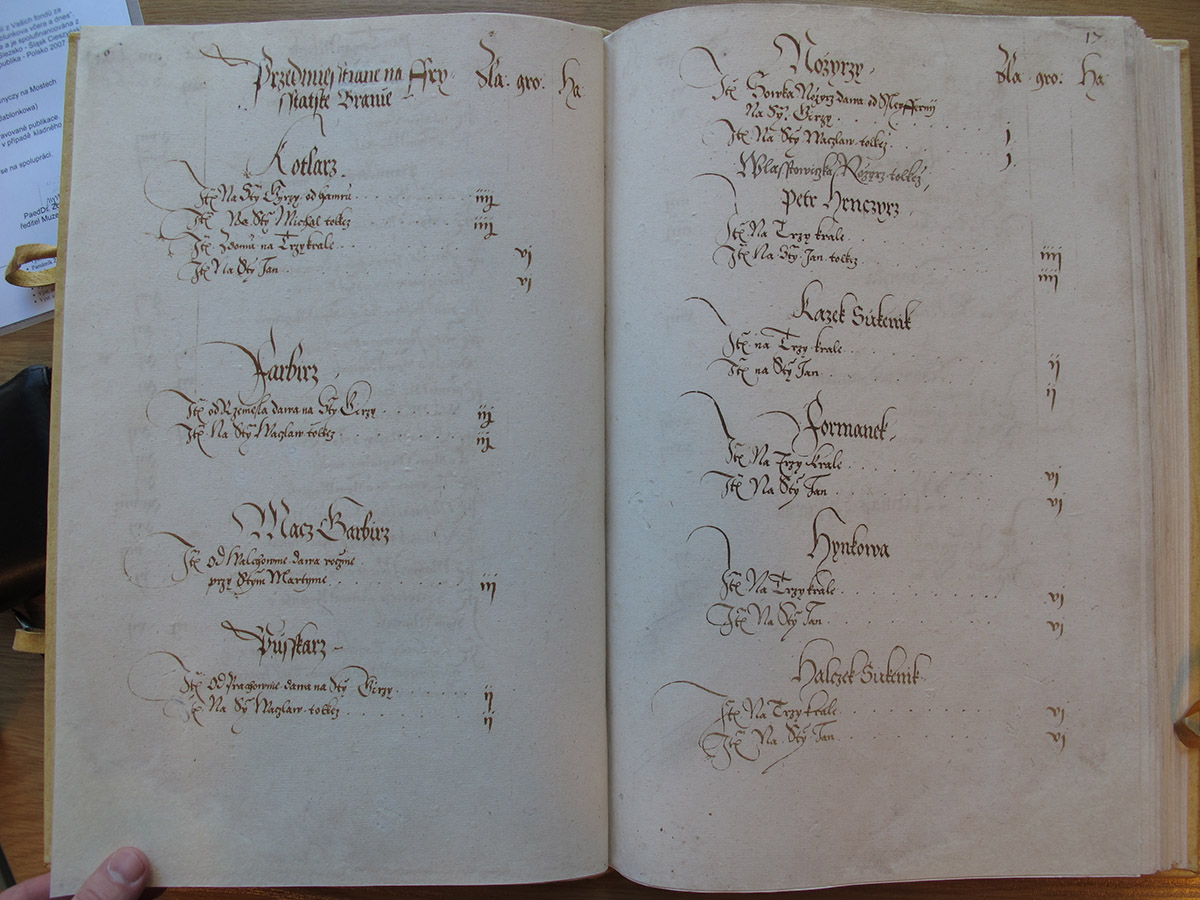 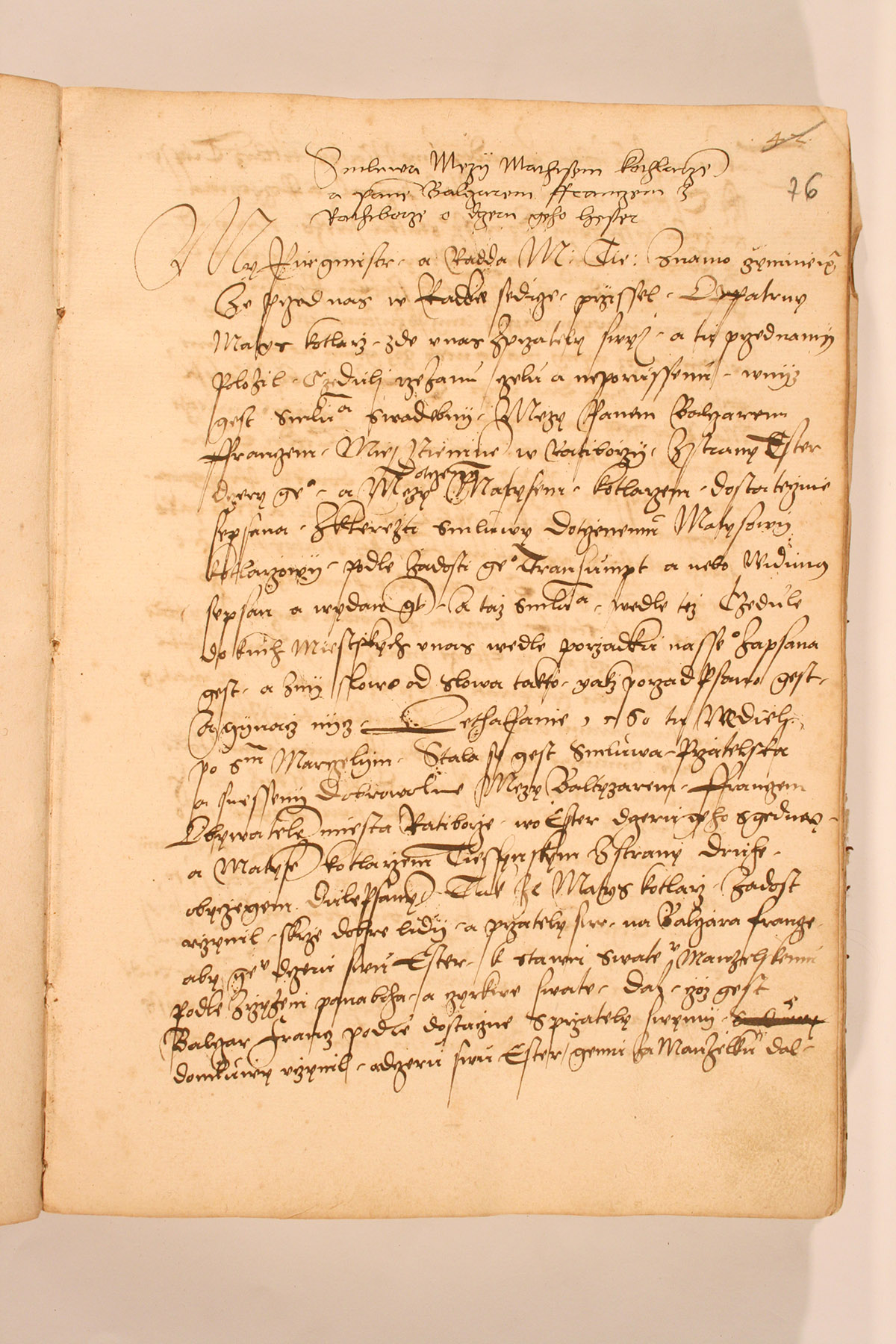 Pre-marriage contract of the Cieszyn coppersmith Mateusz with Estera, daughter of the burgher Balcer Francza from Racibórz, 1560 (AP Cieszyn) 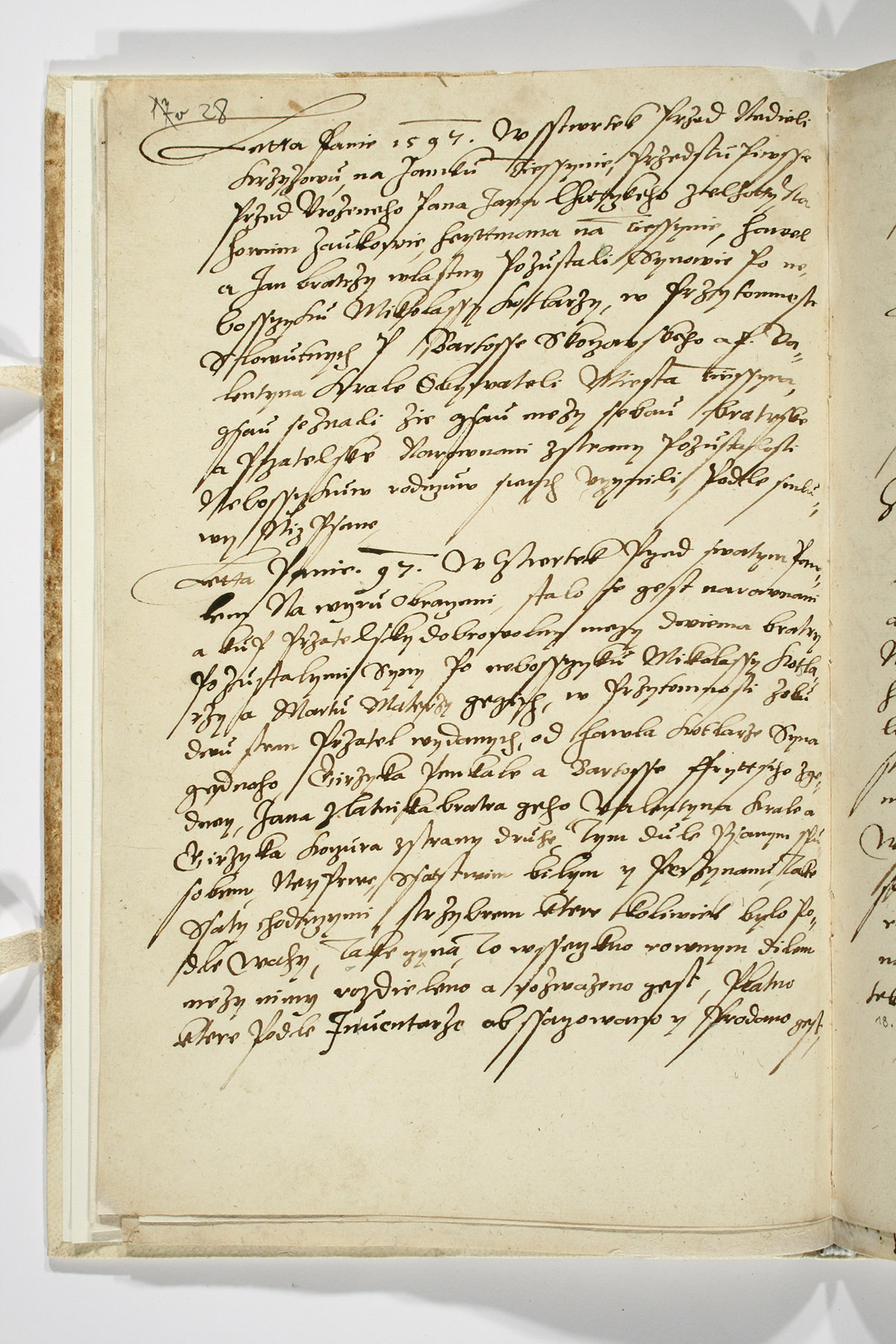 The division of the estate after the deceased coppersmith Nicholas Heinel, 1597 (AP Cieszyn) 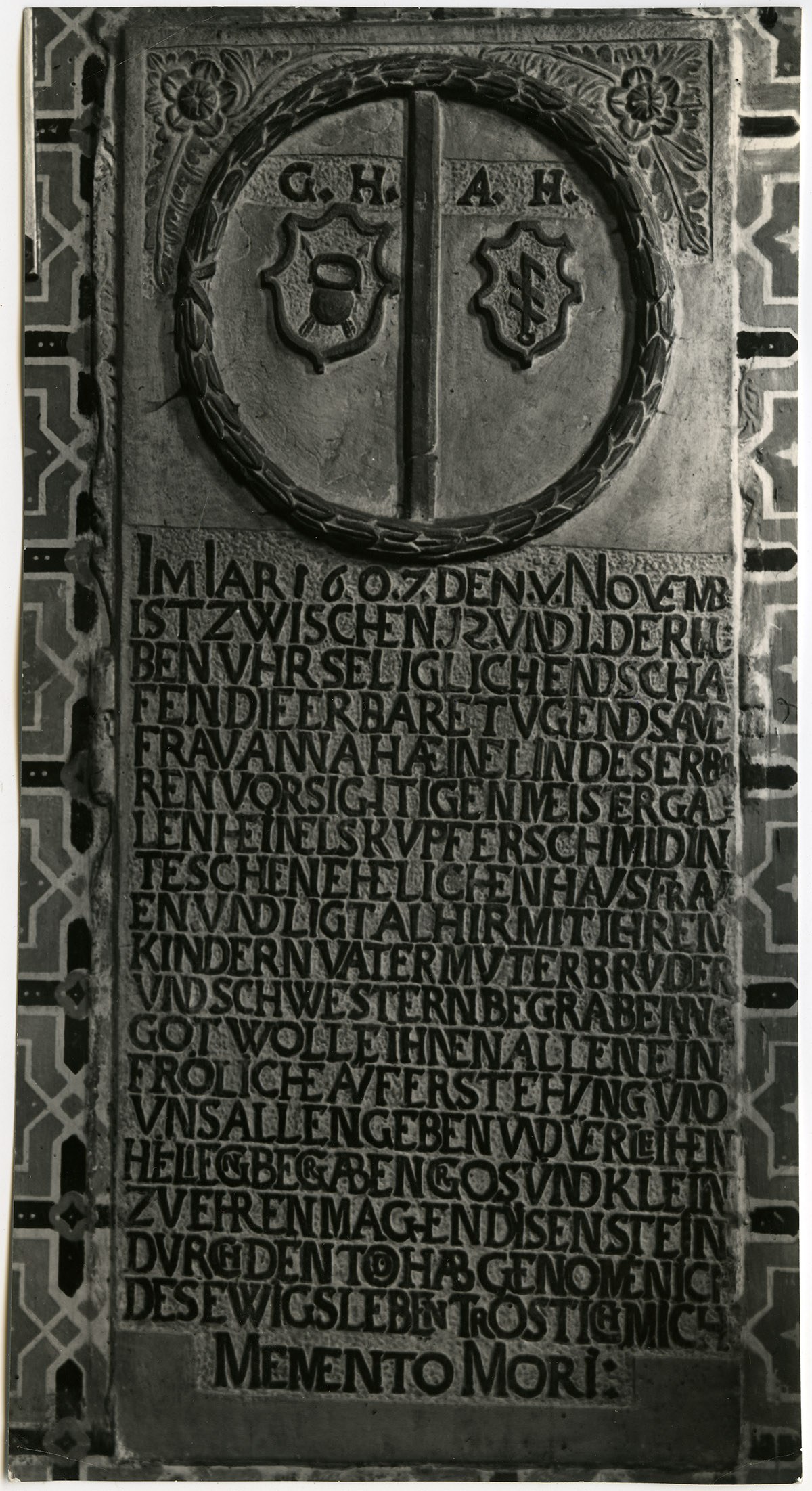 Tombstone of Anna, the wife of Haweł Hainal from 1607 preserved in the church of St. George (Museum of Cieszyn Silesia Collection) 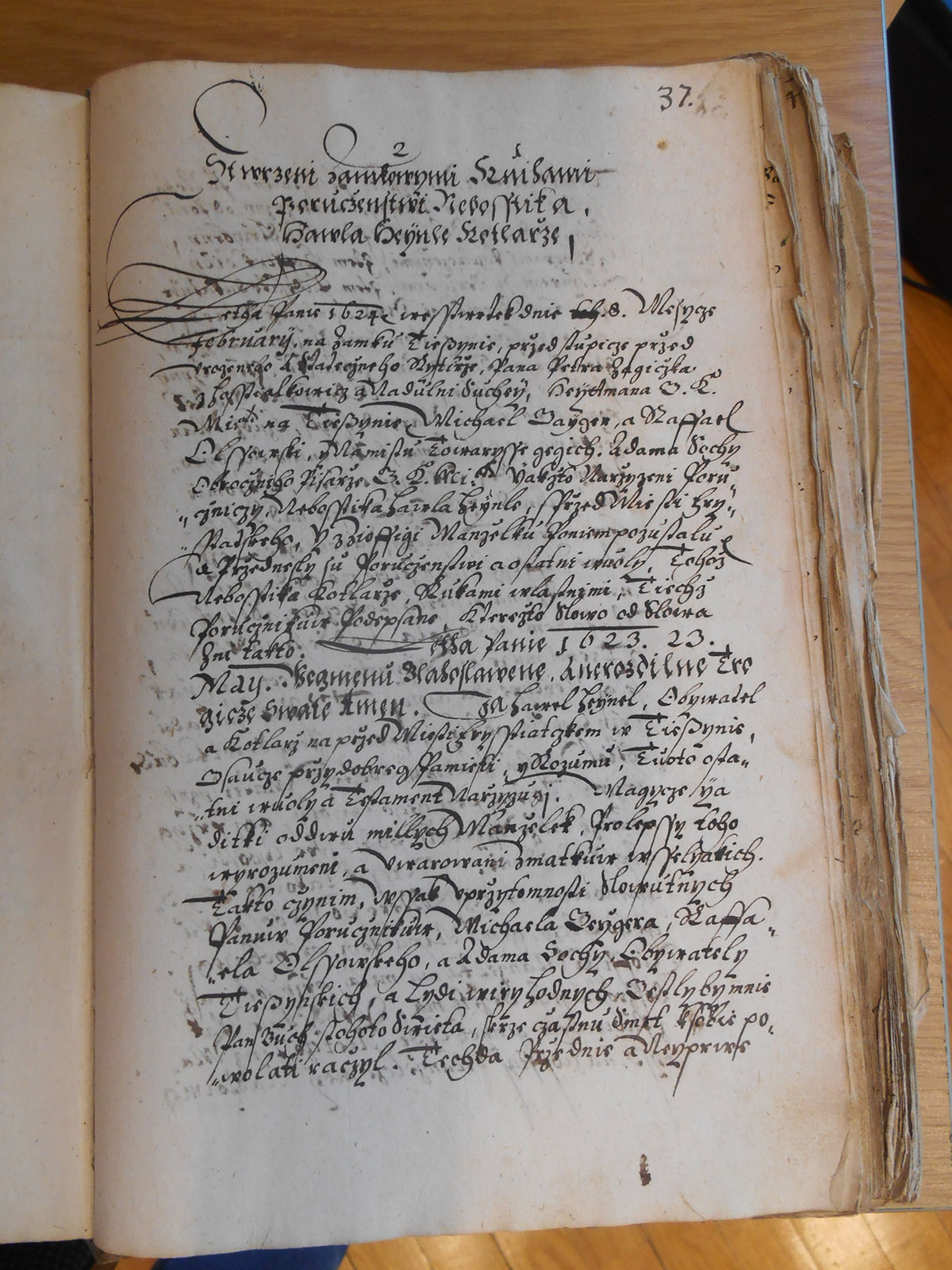 Contract for the purchase of copper forge by Hanusz Reilbacher, coppersmith, 1624 (AP Cieszyn) 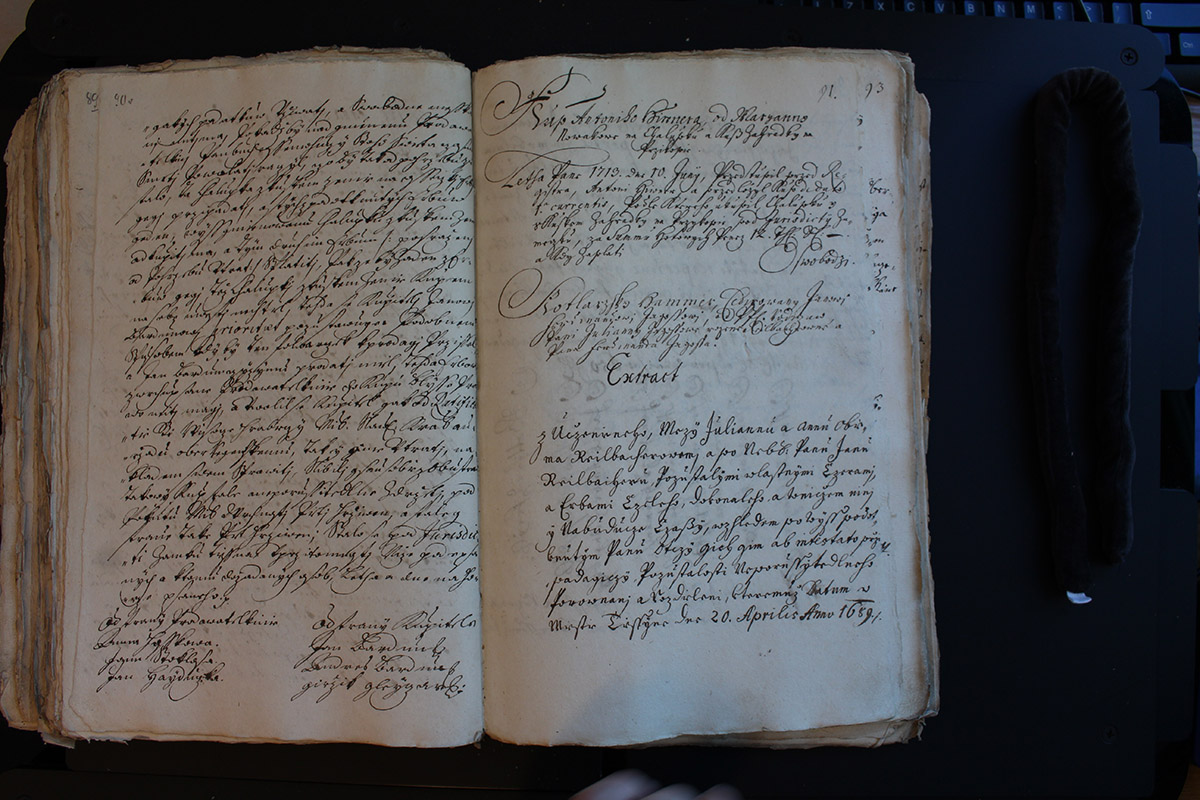 Division of the legacy between the daughters of Reilbacher, 1689 (AP Cieszyn)