In the times of the Piast dynasty, the present-day district of Cieszyn called Mała Łąka (Little Meadow) was not a part of the town. It was included in the ducal demesne. As a suburb of Cieszyn, it played a vital role and provided farming products to the town. Everything changed in the second half of the 19th century, when it was incorporated into the town. The suburb is located in between the Olza River and Bobrówka stream. Since the very beginning, it was mostly farmers who settled in this area and this situation did not change until the second half of the 19th century. In the 16th century, meadows and pastures in the area were divided into a few farms. An urbarium was a book that listed the amounts which tenants were obliged to pay their master. In Cieszyn, officials kept an urbarium of estates which belonged to the ducal demesne. In 1577, twenty one owners of farmsteads located in Mała Łąka were entered into the urbarium. Some of them were townsmen from Cieszyn, but most were the so-called suburbanites. They were all obliged to pay rent to the prince. This was a strictly financial liability, they had no liabilities in kind. Until 1770, a few urbaria were drawn up. There were entries concerning Mała Łąka which indicate that its agricultural character did not change over two centuries. However, the number of properties fluctuated slightly.

In modern times, hop was cultivated in the suburb for the purposes of the brewing industry in Cieszyn. However, the acreage was not enough to satisfy the demand of town breweries and it was necessary to import hops from Gliwice. The biggest hop fields in Upper Silesia were located in the vicinity of that town. At that time, the only industrial building in the suburb was the copper forge. The forge was built by an arm of Młynówka which went next to the Castle Hill, near the bergfried, by the north-east flank of the castle.

A gradual transformation of this district began when the train bridge was opened. It was an iron construction over the Olza River which was built in 1888 past the Castle Hill. Until 1918, it was used by the Railway of Silesian Towns which connected Bielsko to Kojetín, a town in Moravia. The bridge was destroyed at the beginning and then at the end of the Second World War. When the war ended, it was used for many decades for freight transport. Today, trains which connect train stations on the Polish and Czech sides of Cieszyn also use this bridge.

In the same year, a new city project was launched in this part of town, at Rzeźnicza Street (they are today known as Mostowa and Łączna Streets), next to railway tracks. It was a new slaughterhouse. However, as it soon turned out, it could not fully satisfy the demand for meat products in Cieszyn and its vicinity. This is why it was extended and a new facility was opened in 1903. It was modernized and advanced devices were purchased. When the town was divided in 1920, the production capacity of the slaughterhouse decreased because its products were no longer sold in Zaolzie (Trans-Olza region). It was not until 1923 that the production volume returned to the level from before 1920. What contributed to this upturn was the opening of another facility in the slaughterhouse, namely the first preserve factory in Silesia. When the financial situation improved, town authorities made further investments, for example a laboratory and new office rooms were opened. As a result, at that time the slaughterhouse was made up of a few dozen buildings. Because it was located next to railway tracks, its products could be exported outside Poland. The facility functioned throughout the Second World War and in the times of the Polish People’s Republic. After 1989, the state-owned facility was denationalized and today it is known as Zakłady Mięsne Gawłowski Józef i Piotr sp. j.

Another building erected next to the railway tracks in Mała Łąka was a power station, opened in 1910. From the end of the 19th century, cities in Europe were being electrified. In Cieszyn, a company which was supposed to build a power station was established in 1906. In the beginning, the power station was owned by AEG, a Vienna joint-stock company, but in 1915 it was bought by town authorities. Thanks to the power station, it was possible to electrify the town and start another project, that was building an electric tramway. The power station generated direct current and two steam engines gave it the power of 350 hp. Its furnaces were fuelled by coal delivered by train from the Ostrava-Karviná coal basin. Until 1926, electrical energy generated by the power station was used by both towns. Afterwards, it was the Silesian-Moravian power station that generated electricity for Český Těšín. The lack of demand from Czechs caused a 30% production drop. However, in subsequent years the demand for electrical energy grew steadily. In 1936, the power station in Cieszyn generated 4,500 000 kWh. At that time, the power station obtained a license to electrify towns and villages in Cieszyn County. Moreover, customers from neighbouring counties were interested in electrification as well. One of the biggest electricity customers was a cement plant in Goleszów. After the Second World War, the power station was developed and its power was increased. In 1950, the state-owned facility became a part of Zakłady Energetyczne Okręgu Południowego w Katowicach (Power Distribution Company of South District in Katowice). Further projects made it possible to generate and distribute heat to many industrial facilities which were being built in Cieszyn at that time. A city heating network was also created. Further organizational changes took place at the end of 1976. It was then that the facility in Cieszyn (EC III Cieszyn) became a part of Zespół Elektrociepłowni Bielsko-Biała (Bielsko-Biała Electrical Power and Heating Plants Complex). At the same time, a Heat Network Division was created and then merged with Wojewódzkie Przedsiębiorstwo Energetyki Cieplnej (Province Heat Distribution Enterprise in Bielsko-Biała, WPEC). An important date in the history of the power station in Cieszyn was 1985, when electricity production was brought to a halt. The power station was restructured once again in 1992. The companies merged and today they operate jointly as Energetyka Cieszyńska Spółka z o.o. (Cieszyn Energetics, limited liability company), which deals with the generation and distribution of thermal energy.

When the power station was launched, town authorities in Cieszyn could focus on another project, namely open a tram line. The aim was to enable better and faster communication within the growing town. The line was opened on 12th February 1911. The tram line, which was 1793 m long, led from the intersection of Wyższa Brama and Bielska Streets (near the evangelical church and the Silesian Hospital) through the market square and Głęboka Street to Friendship Bridge and then through Główna and Dworcowa Streets to the train station in present-day Český Těšín. When the Austro-Hungarian Empire was coming to an end, it was the main train station in town. A tram depot was built in Mała Łąka. Tracks along Zamkowa and then Dojazdowa Street led to it. This small building housed three tracks and two wagons could be garaged on each of them. There was also a vehicle repair pit. The building still stands and now there is a bookbindery in it. After the First World War, as the result of tensions between Poland and Czechoslovakia, as well as meticulous border controls, the tram system was closed down on 2nd April 1921.

After the fall of the Polish People’s Republic, industry continued to thrive in this small district of Cieszyn, but in new legal and economic conditions. Metal companies, a printing house and a new meat plant were set up. Today, the backbone of the district are Dojazdowa and Rzeźnicza Streets. However, to facilitate access to companies located there, the main route in the area was renovated and a new street, called Łączna, was build. There is a roundabout which links it with Frysztacka Street, an expressway, and a road border crossing. Apart from numerous companies, there are also residential buildings, as well as a secondary school and a college of further education, that is Organization and Management School, which was opened in 1992. The most important leisure facility in the district is Cieszyn Olympians’ Sports and Entertainment Arena, which was built in 2013 next to the Castle Hill. In winter, it serves as an indoor ice rink measuring 30x60 m, whereas for the rest of the year it is used to practice volleyball and basketball. 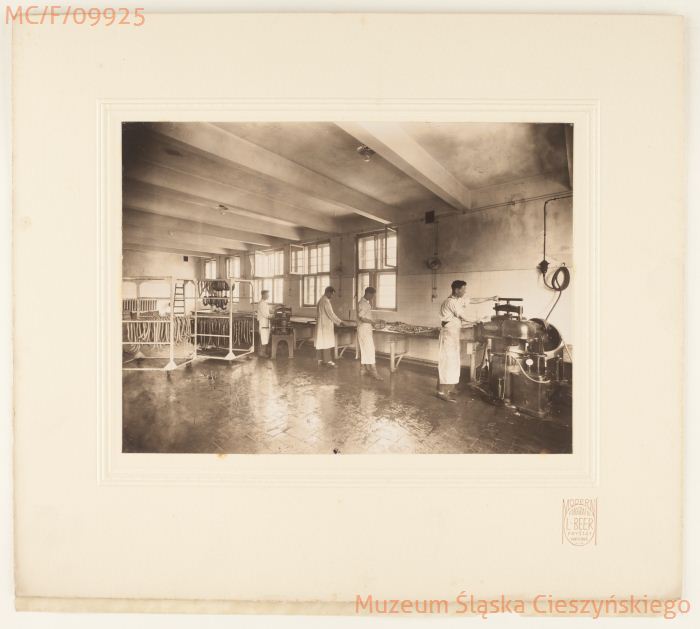 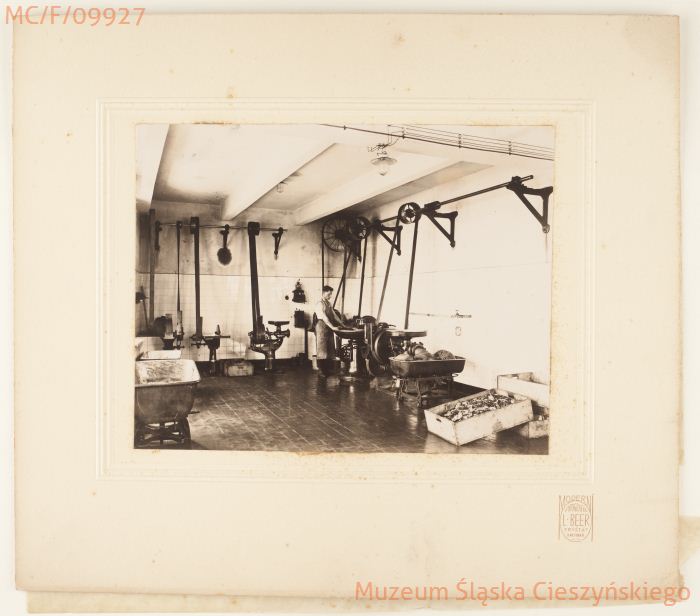 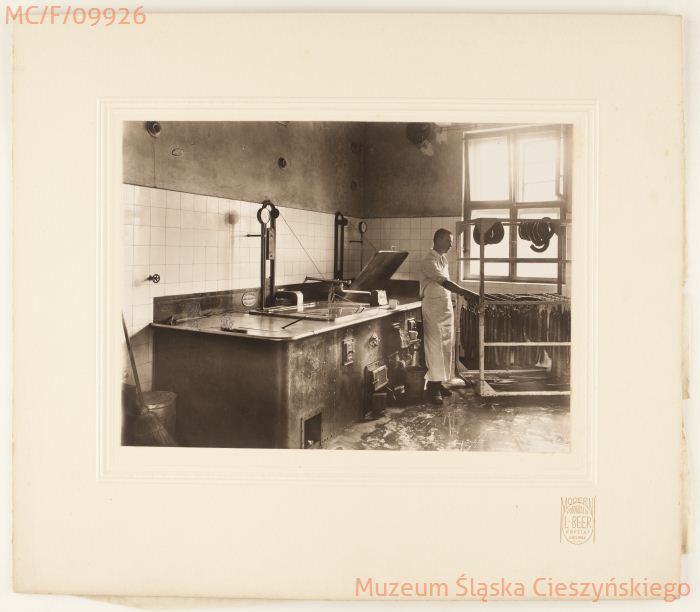 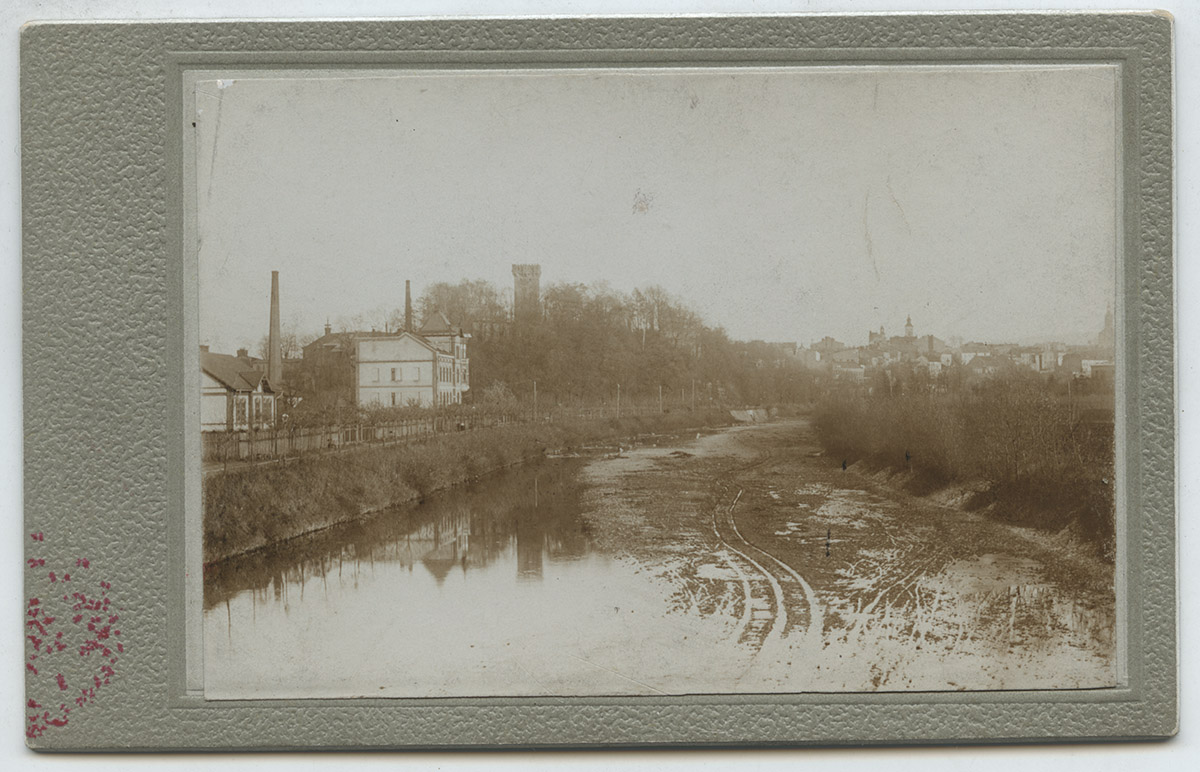 View from the railway bridge to Mała Łąka towards Góra Zamkowa, turn of the 19th and 20th centuries (Museum of Cieszyn Silesia)