The Polish authorities of the united (in October 1938) Cieszyn were making plans for a revival of its former prominence when clouds of war gathered over the town. Hitler’s far reaching plans included, for the moment, the opening of the Third Reich Consulate in West Cieszyn on 7th November, which spurred the activities of German fighting squads, operating in the area for some time. The intensification of sabotage and reconnaissance activities began in April 1939 when plans for the attack on Poland were already known. The intelligence and diversionary role of the consulate consisted of, inter alia, supporting the activities of such organizations as Volksbund für das Deutschtum im Ausland or Volksdeutsche Mittelstelle. A sabotage group - Kampforganisation Olsa-Gebiet - operated in Cieszyn. On one hand, the groups aimed at preventing the retreating Polish Army from destroying strategic objects and, on the other, at initiating provocations suggesting anti-German activities by the Poles. The blowing up of the Frederic Schiller monument in Cieszyn on 28 August 1939 can serve as an example. In an effort to prevent acts of sabotage Polish authorities arrested some of the most active Germans and took over a few institutions together with their buildings. In self-defense, in order to protect inhabitants from the activities of the so called Fifth Column, The Citizens Guard (Straż Obywatelska) was formed.

The 1st Battalion the 4th Podhale Rifles Regiment (4. Pułk Strzelców Podhalańskich) and the regiment’s command was stationed in the town. The task of the 1st Battalion under the command of Franciszek Perl was general defense along the Olza River. In the event of heavy enemy pressure it was to engage in delaying battles and retreat to the main line of defense near Bielsko. Artillery support was provided by a squadron of the 21st Regiment of Light Artillery (howitzers 100 mm) and a platoon of regimental artillery (cannons 75 mm). The 1st company under the command of Captain Józef Grcar manned the north-western outskirts of the town from Ostrava road to the post in Boguszowice and an officers’outpost consisting of an infantry platoon with a heavy machine gun located on a hill in Mistrzowice. The 2nd company led by Lt. Michał Boruc took up positions in the southern outskirts of the city (Błogocice suburb and Sibica village) with an outpost in the vicinity of Żukowo.  The 3rd company, led by reserve Lt. Edward Stachak, positioned in the eastern part of Cieszyn in the Bobrek neighborhood region, formed the rearguard.

On September 1st, before 5 AM Polish posts were shelled by German airplanes. At about 6.30 reconnaissance squads of the German 45th Infantry Division were seen in the vicinity of Cieszyn. First encounters with Polish outposts in Mistrzowice and Stanisłowice took place. That afternoon the Germans reached Cieszyn and attempted to cross the Olza River near Boguszowice. Polish forces, with support from four fighter aircraft PZL P.11 which took off from Aleksandrowice, impeded the river crossing and the regimental command moved to the eastern outskirts of Cieszyn, to the vicinity of the teachers’ college in Bobrek. Even though the 1st Battalion commander, the above mentioned Franciszek Perl, was ready to continue the fight, he complied with the decision of the Command of the Polish 21st Mountain Infantry Division and pulled back from Cieszyn toward Skoczów and then all the way to Bielsko. During this maneuver all three bridges (2 road bridges and 1 railway bridge) on the Olza River were blown up and the last evacuation train destroyed the tracks behind it. It can be assumed that after 3 pm there were no Polish soldiers left in Cieszyn. It was a moment of triumph for German fighting squads led by the self-proclaimed mayor Hans Cinciała who took over the city. Soon after, Wehrmacht forces crossed the Olza and were welcomed by local Germans. Witnesses to those events remembered Cieszyn townswomen who welcomed German soldiers not only with flowers but also with baskets full of sandwiches.

On the same afternoon the monument commemorating Silesian legionaries at the foot of Castle Mount was destroyed and flags with swastikas appeared on Cieszyn buildings and the Piast Tower. Military activities moved westward to the vicinity of Skoczów and Bielsko to where Polish forces had retreated. 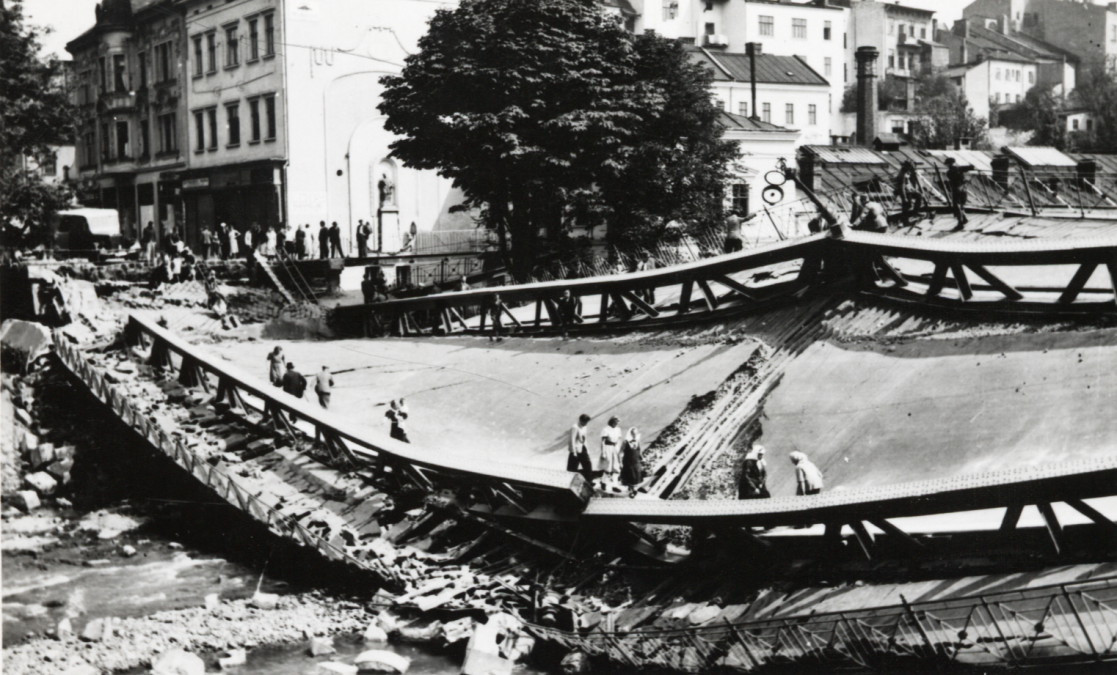 “On September 4th we were taken back to Cieszyn. I could hardly recognize the town – a multitude of flags with swastikas and banners proclaiming: ein Volk, ein Reich, ein Führer" – reminisced Tadeusz Wegener captured in September 1939.

Cieszyn Silesia was instantly annexed to the Third Reich. It was divided into two counties: Cieszyn County (including former Freistadt County) and Bielsko County (with Biała District) which became a part of the newly formed Katowice administrative district (Regierungsbezirk Kattowitz). 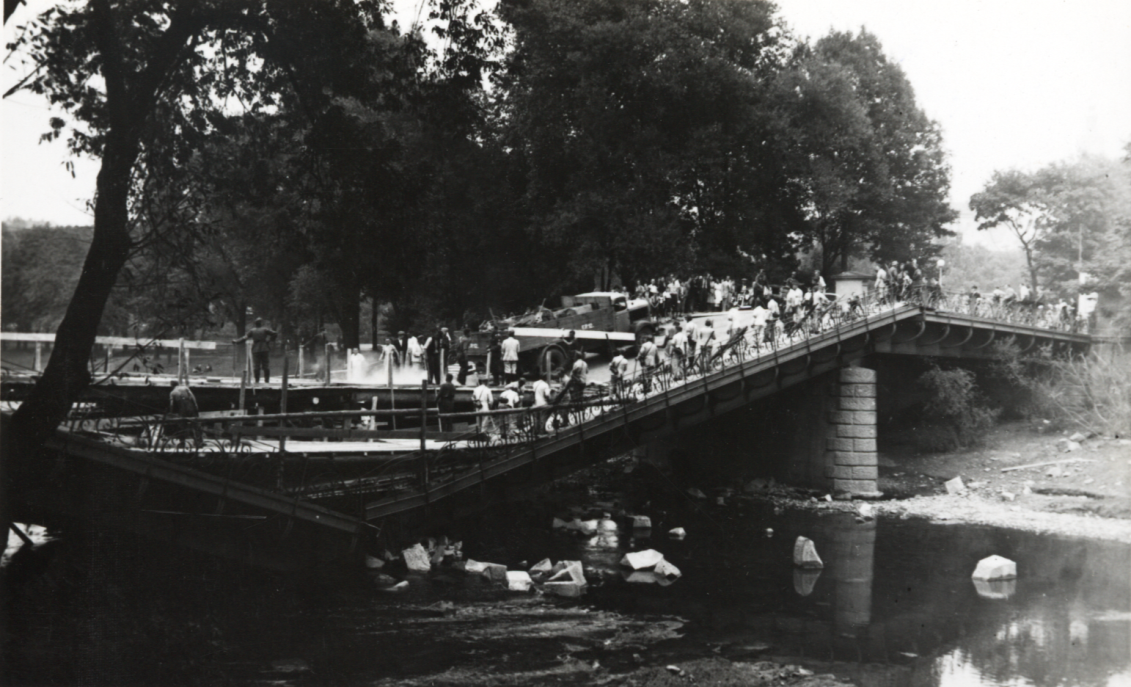 On May 1, 1945, when the outcome of the war was already apparent, the occupants’hatred led to another execution.  This time in the old Jewish cemetery at Halżaska street 81 persons (Poles and Czechs) were shot.

Police registration lists (so called “palcówki” – “fingerings” from finger prints), carried out between the 11th and 23rd of December, 1939, were the first step in compiling a population count aimed at determining the number of German inhabitants. Registered in Cieszyn, a town of over 26 thousand inhabitants, were 15 658 Germans, 8 553 Poles, 295 Czechs, 1 752 “Silesians”and 202 „others.”  Next, in accordance with the March 4, 1941 decree, the German People’s List, or the Deutsche Volksliste, was introduced.

Every inhabitant of Cieszyn was entered on the Deutsche Volksliste by a German official who assigned him an applicable category – I to IV. The categories were assigned on the basis of data obtained through mandatory (at some point noncompliance carried the threat of death penalty) survey and community interviews. Those assigned to the I and II category were automatically granted citizenship of the III Reich, those in the III category were granted citizenship for 10 years, and those in the IV category were granted citizenship as an exception. A refusal to complete the questionnaire could result in a deportation of the entire family to a concentration camp. It should be remembered that both the Catholic Church, represented by bishop Stanisław Adamski, and the prime minister of the Polish Government in Exile, Władysław Sikorski, in order to save the Polish element from total annihilation, appealed for filling in the questionnaires. In Cieszyn, 25 845 people were entered on the Deutsche Volksliste. The remainder included 1 434 Poles, 215 Czechs and 1 081 others.

The Nazi racial policy called for extermination of Jews. “Due to war, blackout regulations were in force in the city. They facilitated… pillaging of Jewish stores and warehouses. … in the evenings one could hear shutters being opened. Trucks with trailers bearing Wehrmacht markings drove up. They were loaded with leather from Huppert, shoes from Rippner and Better, fabrics from Pollak, Spitzer and The Gentleman Salomon Huppert, clothing from Schönberg, Stechler, the Luftiks. They took a special liking to confectionary stores and storages: Szramek Brothers and Delta and Mandel Chciel’s shop in Stary Targ. They took timber from Fischbein and Glessinger and automotive parts from Meier ... Former Jewish and Polish factories also fell under the special care of the super-humans (Übersmenschen). It was all in accordance with the law once the regulations concerning abandoned property became valid. The Poles and the Jews were gradually driven out of their apartments, which were needed for German personnel arriving from Germany...” – related a witness, an inhabitant of Cieszyn, Franciszek Pasz.

Not many Cieszyn Jews survived World War II and even fewer returned to Cieszyn. Already on September 2nd the synagogue in Benedyktyńska Street was burned down and on September 13th the most impressive one in Gęsi Targ shared its fate. Strangely enough, the Germans left the Jewish cemeteries along Hażlaska Street undisturbed. Still, at the very end of the war one of them was used as the site of the above mentioned execution on May 1, 1945. 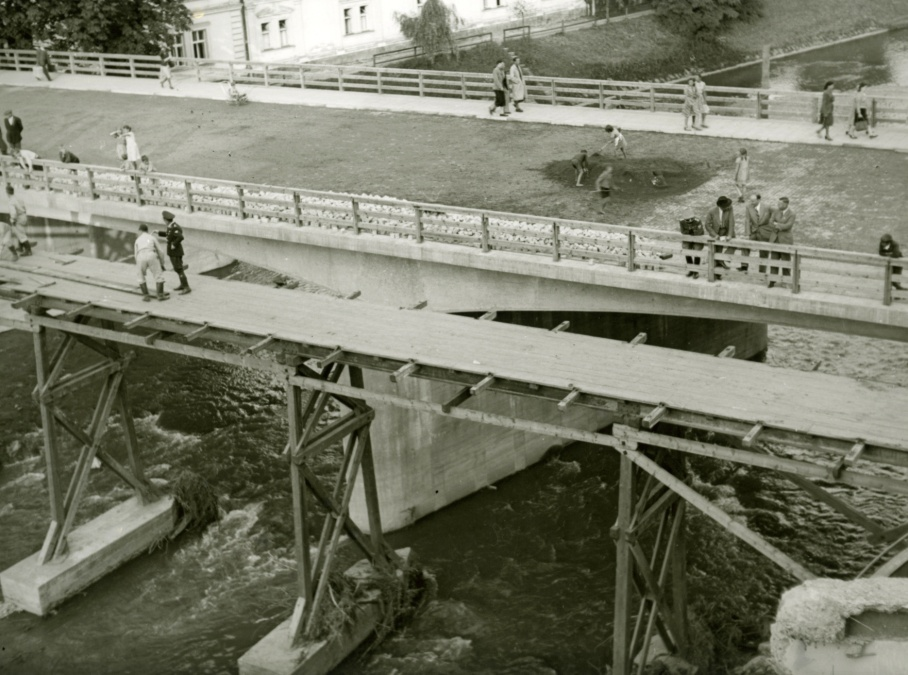 Most public buildings were taken over by the German administration. The ill-famed Gestapo (Geheime Staatspolizei) settled in present Masaryk Avenue. NSDAP  took over the City Hall. In a part of the City Museum (today 6 Regera St.) a branch of the Central Institute for Upper Silesia Regional Research (Zentralinstitut für oberschlesische Landesforschung) made itself at home. The majority of squares and streets were given new German names (see: http://stajniaaugiasza.net).

When in West Cieszyn in the spring of 1941 the Germans enlarged the old field hospital on Konteszyniec dating from WWI, they also set up a multinational prisoner-of-war camp - Stalag VIII D. At first subordinate to the camp in Łambinowice, it became an independent unit and began to supervise a dozen or so smaller camps (about 60 000 prisoners in 1944).

For the inhabitants of Cieszyn the war was not only a traumatic experience but also a test. In the face of brutal terror, the will to survive dominated and the borders of compromises reached testified to the strength or weakness of characters. The somber times under occupation brought to light the complicated ethnic structure of Cieszyn. On one hand there were Germans welcoming Nazi soldiers as liberators, on the other there were Poles and Czechs who saw them as oppressors,. Across such obvious divisions ran others, formed by tradition, upbringing and strength of character. On one hand examples of unconcealed collaboration which made everyday life simpler, on the other conspiring against the occupant. In Cieszyn, from the first days of war assistance was offered to the victims of the new administration such as the families of those arrested and people who lost their apartments; help was also offered to Jews. Already on November 11, 1939 The Secret Military Organization (Tajna Organizacja Wojskowa) was formed. It was headed by Paweł Musioł who joined the Union of Armed Struggle (Związek Walki Zbrojnej) together with the entire group at the end of 1939 and became an inspector of the Cieszyn and Bielsko Inspectorate. At the same time, Polish Parties Conciliation Committee (Komitet Porozumiewawczy Stronnictw Polskich) came to being. Formed in an attempt at a collaboration of all prewar anti-Sanation parties, it turned into a self-help organization. The closed and relatively small community of Cieszyn ran a high risk of exposure. When in the summer of 1940, in Wisła, Józef Korol, commander of the ZWZ Silesian District, was killed in action, the documents found on him led to arrests (A. Gaś, F. Kwaśnicki, P. Musioł) and the dismantling of the Cieszyn inspectorate which became subordinate to Rybnik. It was recognized as an excellently functioning intelligence network - “August” - organized by the Cieszyn sub-inspectorate head of intelligence Jan Margiciok.

Among the achievements of the underground one should count the successful action of Cieszyn scouts Alfons Tomica, Wilhelm Powada and Wilhelm Stefek who recovered the cast iron fragments of the Silesian legionaries’ monument and Jan III Sobieski commemorative plaque from the courtyard of the Cieszyn museum.

To the Germans the Ostrawa-Karwina Basin was especially important and Cieszyn was a section of the front line. In the summer of 1944 the Soviet offensive was stopped along the Vistula River. It resumed on January 15, 1945 but for a long while was stalled near Skoczów and it was only in the early morning of May 3, after the Germans blew up the bridges on the Bobrówka and Olza, after 2071 days of occupation, that Soviet mounted patrols reached Cieszyn.