Today, in Cieszyn and Český Těšín there are five bridges on the Olza River. For a few centuries, there was only one bridge which enabled communication between the two banks of the river. Towards the end of the 19th century new possibilities to cross the Olza River appeared. Solid road bridges and one train bridge were built. To assure better communication within the town, there were also wooden footbridges for pedestrians. They connected different parts of the town.

People could get to medieval Cieszyn, which used to be the capital of the Duchy of Cieszyn, from the west, using a ford crossing on the Olza River. At the foot of the castle there was a depression and that is where the ford was located. One of the city gates, called Water Gate, also stood there. The wooden bridge on the Olza River must have been built in the 15th century, most probably during the reign of Casimir II, Duke of Cieszyn (1477-1528). Throughout the centuries, the name of the bridge changed. The name which stuck the longest was Long Bridge. Later it was also called Salt, Main, Castle or Olza Bridge. Floods of the Olza River and other natural disasters, as well as the flow of time, damaged the bridge. It was necessary to renovate it, but it was not easy to gather funds for this purpose. The oldest mention of a renovation of the bridge in historical sources can be found in a ledger from 1519. The renovation was financed from the bridge toll. In 1550, Wenceslaus III Adam (1545-1579), the dynast of the time, ordered that townsmen who did not obey regulations issued by him pay a fine which would contribute to the maintenance of Long Bridge. The same problem occurred in the next centuries. Rulers sought for new sources of funding to repair the only bridge on the Olza River in Cieszyn. In 1751, new rules were laid down. The so-called gate fee was introduced, which meant that every person had to pay for entering the town. The sums collected contributed to the maintenance of the bridge and pavement in town.

The bridge facilitated communication between the town, located on the right bank of the river, and ducal suburbs on the other bank of the river, as well as communication with the west part of the duchy, where the road led in three directions: to Moravia, Slovakia and Lower Silesia. After 1781, a brick-built bridge was constructed, and in 1891 it was turned into an iron bridge with girders. In 1920, Cieszyn was divided between Poland and Czechoslovakia and checkpoints with customs officers appeared on the bridge. When the Second World War broke out, the retreating Polish army blew up the bridge on 1st September 1939. However, it was not completely destroyed. A footbridge connecting the two towns was quickly set up and the renovation of the old bridge begun. The bridge was destroyed once again by the German army on the night of 2nd May 1945. When the war ended, a temporary bridge was built. In winter 1946, it was destroyed by floating ice and rebuilt once again. It was not until 1950 that the Czechoslovak company Státní silnice started the construction of a bridge made of reinforced concrete, which was designed by Pragostav, another Czech company. Since 1954, it has served as the main bridge connecting the Polish and Czechoslovak sides of Cieszyn and from then on it was called Friendship Bridge. In 1968, Red Army tanks drove through the bridge to provide assistance to Czechoslovakia. In 1987, the bridge was partially roofed to facilitate border controls. Today, after Poland and the Czech Republic joined the European Union, the bridge can once again join, rather than divide, the two towns and the two banks of the Olza River.

The second bridge, or rather a footbridge, was the so-called Kametz Footbridge. During the Second World War it was called war bridge and in 1945 it was usually referred to as the new wooden bridge or colloquially as highlander bridge and also as culvert bridge. At the end of the 19th century, Mill Gate was extended and a footbridge over the Olza River was built there. It was named after Ludwig Kametz, its constructor. The footbridge led to Kamieniec, a village which used to be a suburb of Cieszyn. It is possible that before the abovementioned footbridge was built, its primitive predecessor functioned in the same place. When the Olza River flooded in 1943, the footbridge was weakened. In 1952, after another flood, the condition of the bridge was really bad and it was disassembled. Another bridge was opened in 1970 due to problems with cross-border traffic. They started when Liberty Bridge was damaged during the 1970 flood. This is why the Czechoslovak army built a makeshift iron bridge which was 65 m long. It was officially opened on 28th October 1970. There was no guarantee that this structure would survive the next flood. Another catastrophe took place in 1972, when the river swelled, tore off the bridge and carried it to Karviná. It was rebuilt, but in 1982 it was disassembled due to the political situation in Poland. The bridge served the so-called small border traffic, which means that it was used by inhabitants of border areas of Poland and Czechoslovakia who had required passes. They could cross the bridge on foot or in passenger cars. After 1989, local authorities of both towns made an attempt to build in this place a bridge designed by François Roche, a French architect. Unfortunately, so far these plans have not come into fruition. As part of the revitalization of the banks of the Olza River, which was financed by the EU, the area where the bridge used to stand was cleared and there is no trace of it now. Nevertheless, if there were a bridge in this place, communication between the two towns would definitely be much easier.

The third bridge which was built on the Olza River was the train bridge erected in 1888 past the Castle Hill. It is made of iron and one train track goes through it. Until 1918, it was used by the Railway of Silesian Towns which connected Bielsko and Kojetín, a town in Moravia. In September 1939 the bridge was destroyed by the retreating Polish army and then once again in May 1945 by the German army. After the war, it was rebuilt and used primarily for freight traffic. Today, the bridge is used for both goods and passenger transport. There is still a railway line between train stations in both cities, used by the Czech rail operator.

In 1903, Franz Joseph I Bridge, known today as Liberty Bridge, was built. It was supposed to ensure comfortable communication over the Olza River from the old city centre (or from Upper Suburb, to be more precise), located on today’s Polish side, to the train station and numerous industrial buildings erected in present-day Český Těšín. In 1920, after the town was divided, a border control point was established on the bridge. It operated until 2007. In September 1939, retreating Polish soldiers blew up the bridge. Germans did the same thing in 1945. After the war, the bridge was rebuilt, but it was damaged once again in the 1970 flood. It was then that five Polish firefighters died, trying to save the bridge. It is commemorated by a plaque on the former customs office. The renovated bridge was not put into use until 1974. From 1978, there was one-way traffic to Poland, but today it is two-way. The last renovation of the bridge took place in 2010. It its vicinity, there is one more connection between the two towns: since 1987, they are linked by gas pipes.

Through Cieszyn and Český Těšín runs one of the most important communication routes leading from the north to the south of Europe. Since the 1980s, car traffic, as well as passenger and freight traffic, gradually increased and due to customs and passport controls the centres of both towns used to become congested quickly. This situation prompted state authorities of Poland and Czechoslovakia to finance a new border crossing on the outskirts of the towns. In the years 1988-1991, a crossing between Cieszyn and Boguszowice was built. Poles numbered the expressway from Český Těšín to Chotěbuz S1, whereas the Czechs numbered it R48. The bridge was designed by Stańko from Brno, a Czech architect. The project was carried out by PEBK Dromex, a Polish construction company. The bridge is supported by 14 pillars and it is 26 m high, 760 m long and 14.6 m wide. It was built using incremental launching technique. The overpass was officially opened on 19th May 1991. The first renovation works were carried out in the years 2001-2002. After the border crossing was closed down in 2007, buildings on the border lost their significance. New ideas were needed to reuse the former border control platform. In 2010, three lanes on the road were reduced to two. Today, a shopping mall stands in this place.

The newest possibility to cross the river is to use an overpass called Sports Bridge. This construction, which was worth 1.5 million euros, was built as part of an EU programme entitled “Enjoy Cieszyn - A garden on two banks of the river”. The overpass was opened on 6th June 2012. The main partners of the project were Český Těšín and Cieszyn. The overpass was designed by an architectural studio from Brno in the Czech Republic. The bridge was painted pink, which was quite creative (today, it has already faded). It connects leisure areas of both cities, namely Adam Sikora Park on the Czech side and City Park with a canoe harbour and “Olza” campsite in Poland. The overpass is used by pedestrians and cyclists. The bridge is made of steel in the shape of an arch, which is 96 m long and 6 m wide.

Overpass by the Third Weir

In the first half of the 20th century, Cieszyn had one more bridge. It was a wooden overpass, built near the third weir on the Olza River. This is why it was called Overpass by the Third Weir. Today, its former location is behind the hydroelectric power station. The overpass stood there until around 1905. We know what it looked like because it was captured on a photograph. The construction of this overpass was subsided by authorities from Opava. Most probably, it was still used in the interwar period for small border traffic. Thanks to it, the distance from Sibica to Błogocice and from Cieszyn to Konská and then to Třinec was significantly shorter. 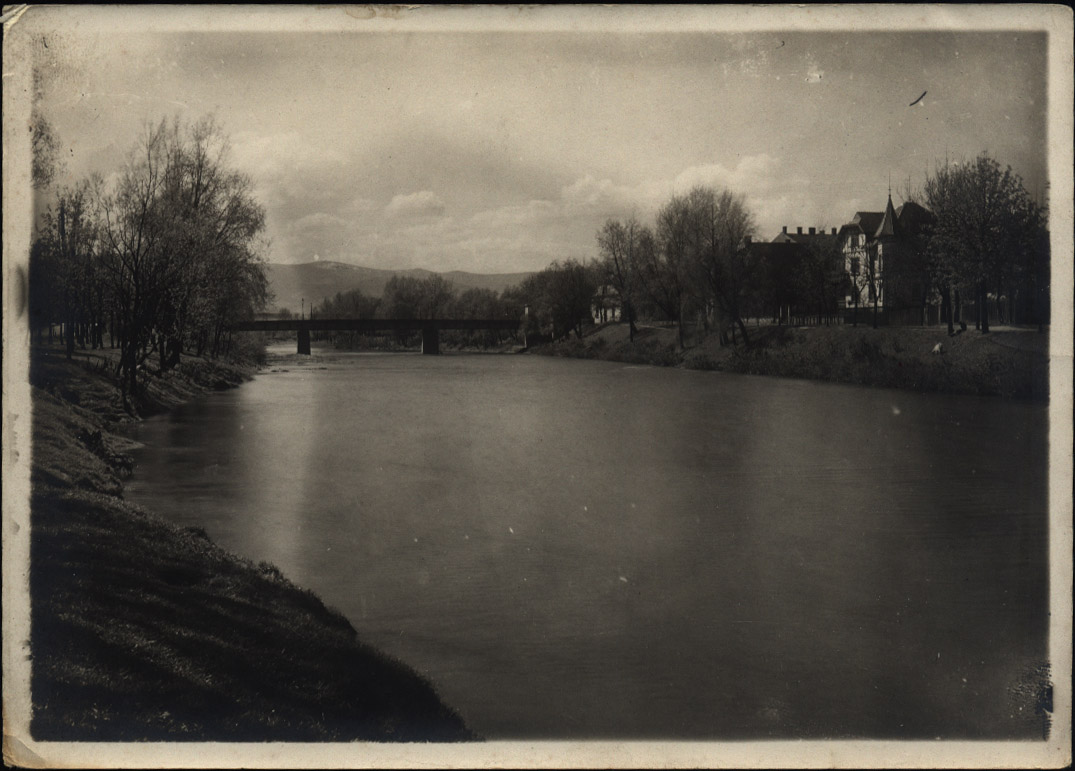 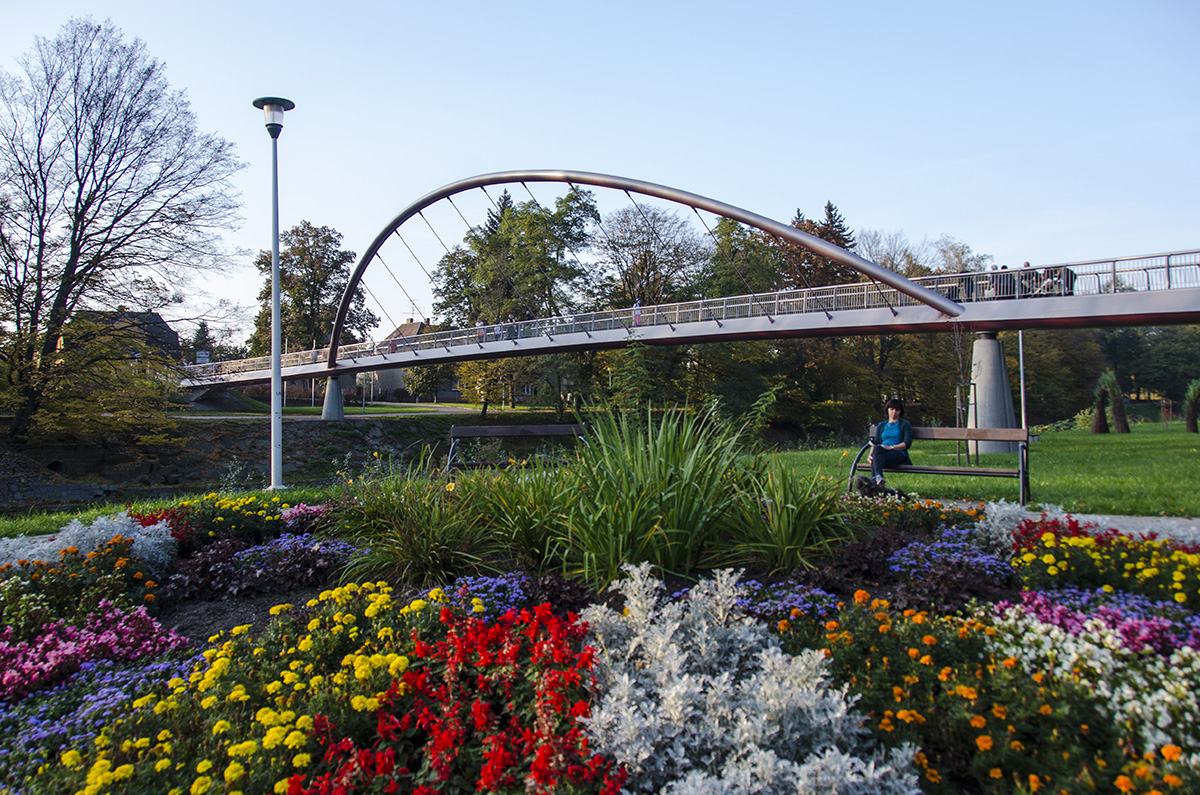 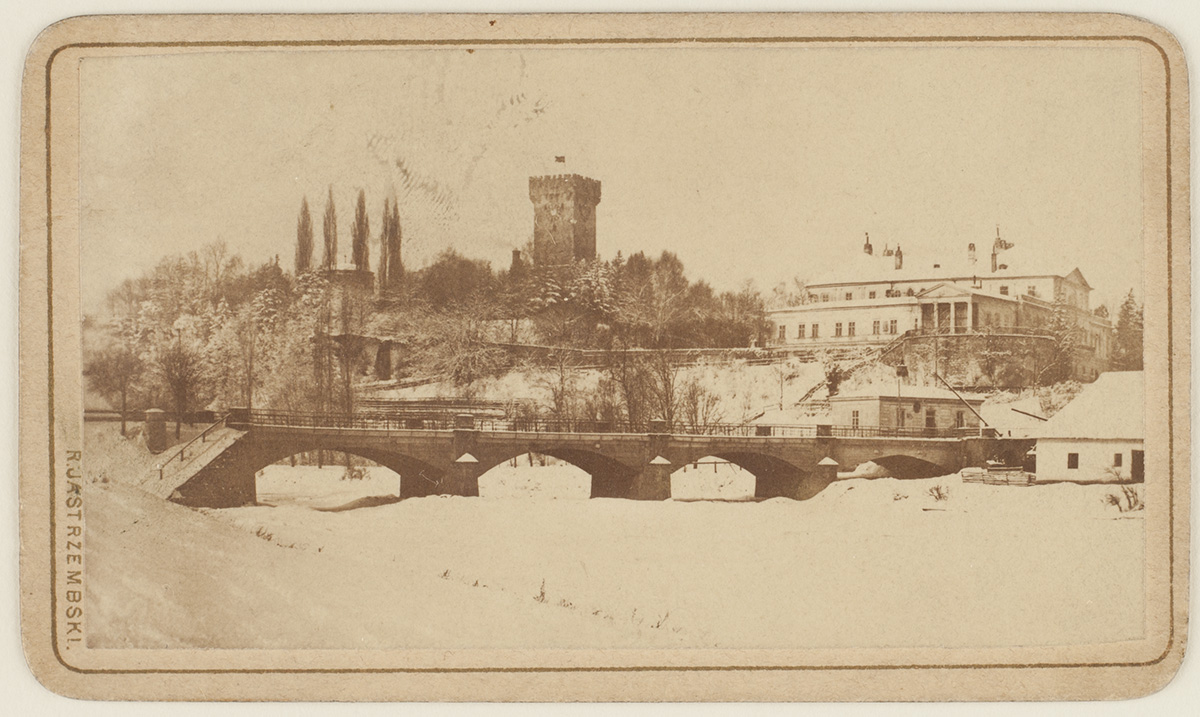 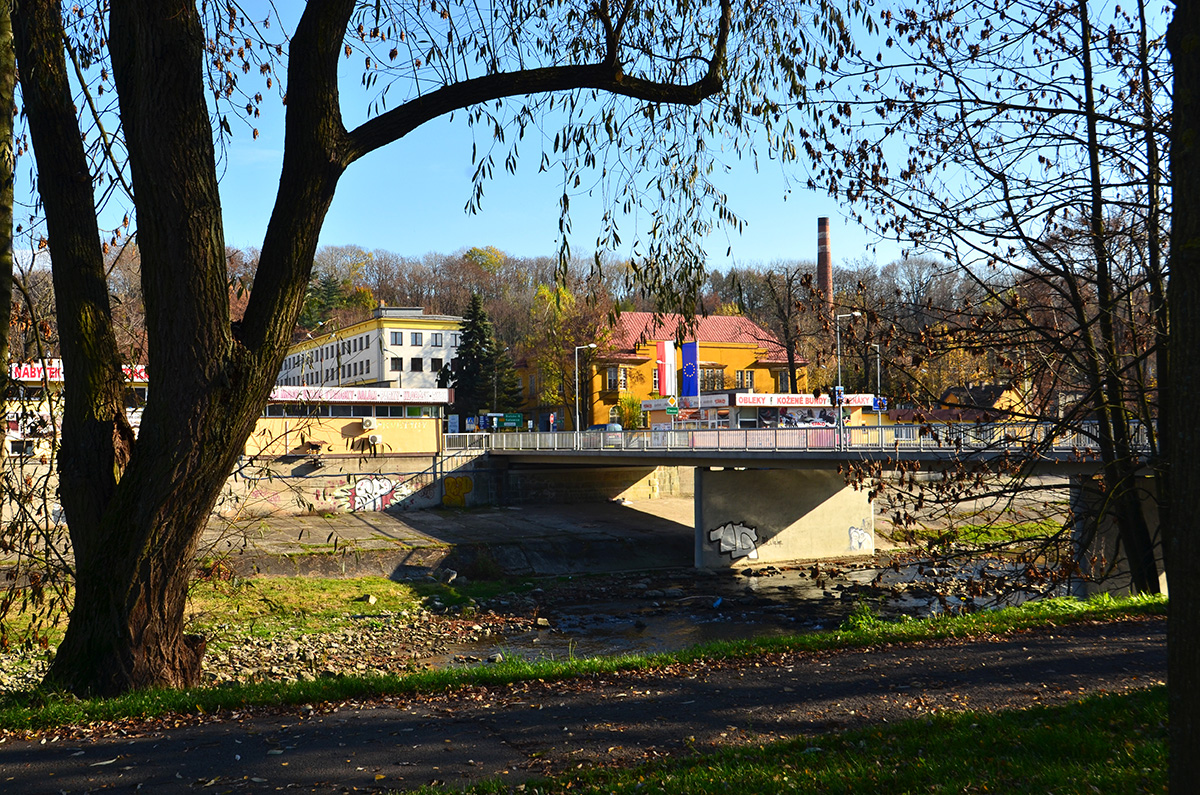 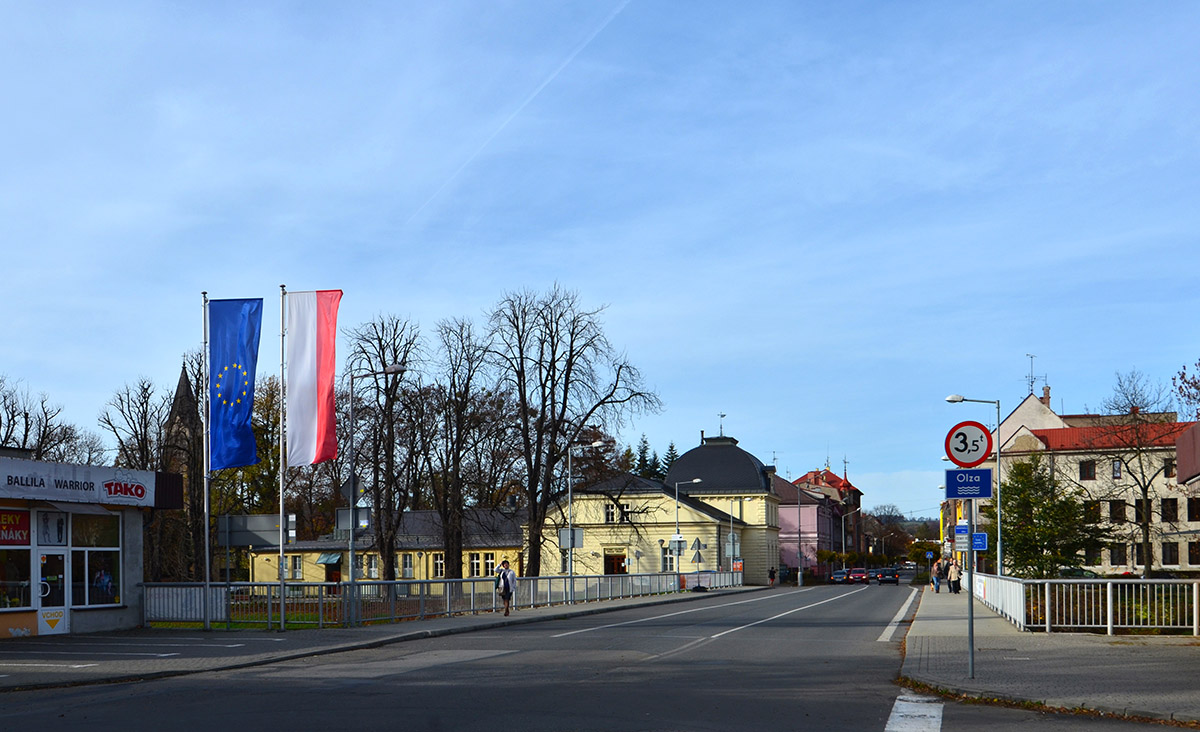 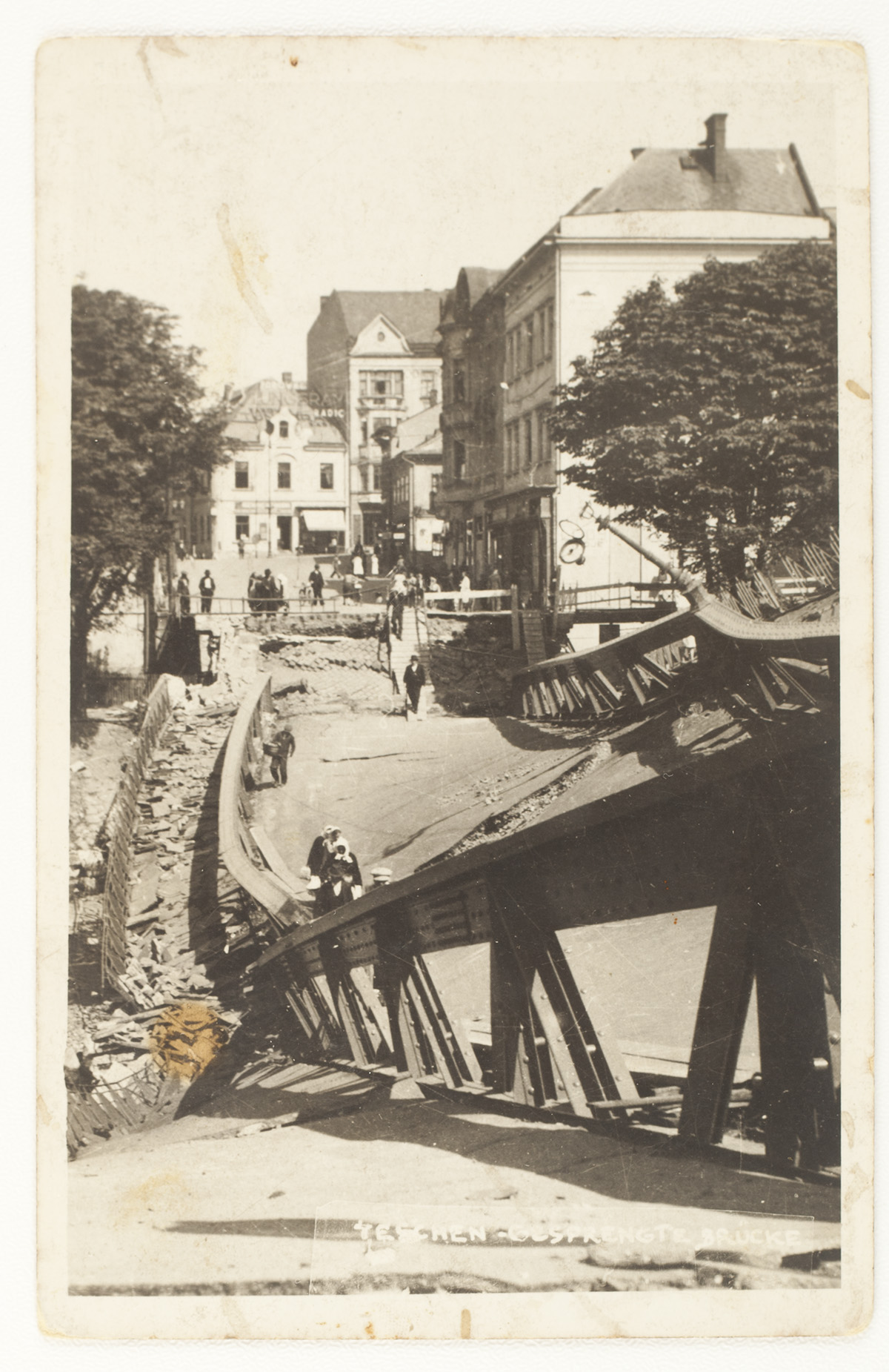